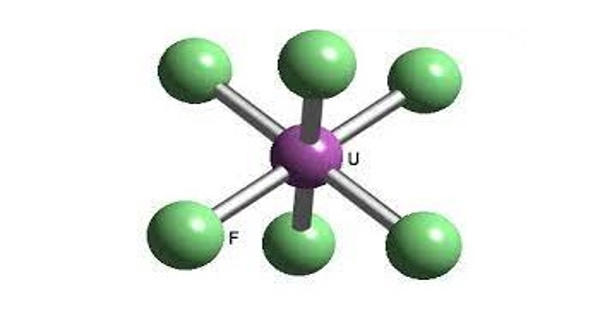 Uranium hexafluoride (UF6) is a chemical compound consisting of one atom of uranium combined with six atoms of fluorine. It is colloquially known as “hex” in the nuclear industry, is a compound used in the process of enriching uranium, which produces fuel for nuclear reactors and nuclear weapons. Within a reasonable range of temperature and pressure, it can be a solid, liquid, or gas.

It is the chemical form of uranium that is used during the uranium enrichment process. Hex forms solid a grey crystal at standard temperature and pressure, are highly toxic, react with water, and is corrosive to most metals. Solid UF6 is a white, dense, crystalline material that resembles rock salt. The compound reacts mildly with aluminium, forming a thin surface layer of AlF3 that resists any further reaction from the compound.

Uranium hexafluoride does not react with oxygen, nitrogen, carbon dioxide, or dry air, but it does react with water or water vapor. Milled uranium ore—U3O8 or “yellowcake”—is dissolved in nitric acid, yielding a solution of uranyl nitrate UO2(NO3)2. Pure uranyl nitrate is obtained by solvent extraction, then treated with ammonia to produce ammonium diuranate (“ADU”, (NH4)2U2O7). Reduction with hydrogen gives UO2, which is converted with hydrofluoric acid (HF) to uranium tetrafluoride, UF4. Oxidation with fluorine yields UF6.

During nuclear reprocessing, uranium is reacted with chlorine trifluoride to give UF6:

When UF6 comes into contact with water, such as water vapor in the air, the UF6 and water react, forming corrosive hydrogen fluoride (HF) and a uranium-fluoride compound called uranyl fluoride (UO2F2).

At atmospheric pressure, it sublimes at 56.5 °C. The solid state structure was determined by neutron diffraction at 77 K and 293 K.

Uranium hexafluoride is used in uranium processing because its unique properties make it very convenient. It can conveniently be used as a gas for processing, as a liquid for filling or emptying containers or equipment, and as a solid for storage, all at temperatures and pressures commonly used in industrial processes.