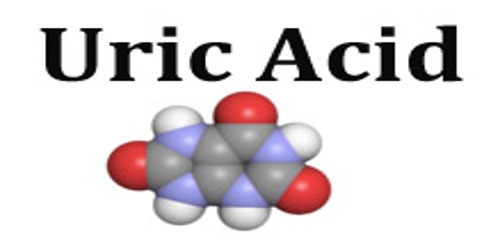 Uric acid is a product produced by the body after the purines in many foods undergo the digestive process and are broken down inside the body. It is a heterocyclic compound of carbon, nitrogen, oxygen, and hydrogen with the formula C5H4N4O3. It forms ions and salts known as urates and acid urates, such as ammonium acid urate. Uric Acid is a white tasteless odorless crystalline product of protein metabolism, found in the blood and urine, as well as trace amounts found in the various organs of the body. It can build up and form stones or crystals in various disease states. It is a heterocyclic purine derivative that is the final oxidation product of purine metabolism. It is produced by the enzyme xanthine oxidase, which oxidizes oxypurines such as xanthine into uric acid. In most mammals, except humans and higher primates, the enzyme uricase further oxidizes uric acid to allantoin. Uric acid is also the end product of nitrogen metabolism in birds and reptiles. In such species, it is excreted in feces as a dry mass. Uric acid is a diprotic acid with pKa1 = 5.4 and pKa2 = 10.3. Thus in strong alkali at high pH, it forms the dually-charged full urate ion, but at biological pH or in the presence of bicarbonate ions, it forms the singly-charged hydrogen urate or acid urate ion. As its second ionization is so weak, the full urate salts hydrolyze back to hydrogen urate salts at pH values around neutral. It is aromatic because of conjugated pi bonding in both rings.

Increased levels of uric acid can cause several different problems, and the potential development of gout is only one of them. Other problems concerning increased uric acid in the body can be the development and ultimate passage of kidney stones, an increase in our blood pressure on a regular basis leading to hypertension, or even the beginning of kidney failure in some rare instances.