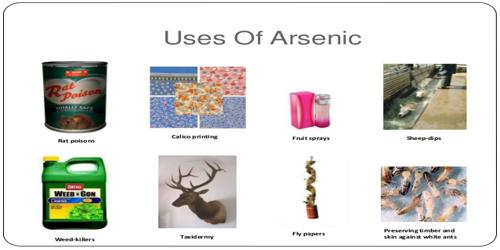 Surprisingly, arsenic can also have medicinal applications. In Victorian times, Dr Fowler’s Solution (potassium arsenate dissolved in water) was a popular cure-all tonic that was even used by Charles Dickens. Today, organoarsenic compounds are added to poultry feed to prevent disease and improve weight gain.

Minute amounts of arsenic are used in the electronics industry. It is added to germanium and silicon to make transistors. A compound of arsenic, gallium arsenide (GaAs), is also used to make light-emitting diodes (LEDs). LEDs produce the lighted numbers in hand-held calculators, clocks, watches, and a number of other electronic devices. Some scientists think that arsenic may be an essential element in our diet in very, very low doses. In small doses it is toxic and a suspected carcinogen. Once inside the body it bonds to atoms in the hair, so analysing hair samples can show whether someone has been exposed to arsenic. Some foods, such as prawns, contain a surprising amount of arsenic in a less harmful, organic form.

A small amount of arsenic is found in its native state. It is mainly found in minerals. The most common arsenic-containing mineral is arsenopyrite. Others include realgar, orpiment and enargite. Most arsenic is produced as a by-product of copper and lead refining. It can be obtained from arsenopyrite by heating, causing the arsenic to sublime and leave behind iron(II) sulfide.

Paracelsus, a 16th-century Swiss German philosopher and toxicologist, once famously said, “all things are poison, and nothing is without poison. Only the dose permits something not to be poisonous.”

But can a toxic element really be necessary for life? A growing body of evidence says yes. Some toxic metals, in trace amounts, might actually be essential nutrients, according an analysis in the journal EMBO Reports. In fact, scientists have found that the body needs arsenic, at a level of 0.00001 percent, to grow and maintain a healthy nervous system, according to Chemicool.

Arsenic is immediately dangerous to life or health at 5 mg m-3.

Our bodies do not readily absorb the element itself, hence pure arsenic is much less dangerous than As(III) compounds such as AsH3 and As2O3 which are absorbed easily and are carcinogenic with high toxicity.