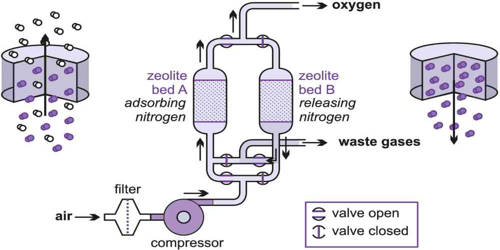 Vacuum swing adsorption (VSA) is a non-cryogenic gas separation technology. It is an oxygen generation systems draw on Air Liquide’s many years of experience of oxygen production.

Using special solids, or adsorbents, VSA segregates certain gases from a gaseous mixture under minimal pressure according to the species’ molecular characteristics and affinity for the adsorbents. They use the process of air separation by adsorption.  These adsorbents (e.g., zeolites) form a molecular sieve and preferentially adsorb the target gas species at near ambient pressure. This works through the use of specific zeolite adsorbents for the selective adsorption of nitrogen over oxygen and argon. The process then swings to a vacuum to regenerate the adsorbent material. They are built and delivered as fully-packaged, pre-tested skids, which can be directly incorporated into an industrial plant.

Typically, vacuum swing adsorption oxygen generation systems can be found in plants belonging to the steel making, glass, pulp and paper, wastewater treatment, or mining industries. VSA differs from cryogenic distillation techniques of gas separation as well as pressure swing adsorption (PSA) techniques because it operates at near-ambient temperatures and pressures. VSA may actually be best described as a subset of the larger category of PSA. It differs primarily from PSA in that PSA typically vents to atmospheric pressures, and uses a pressurized gas feed into the separation process. VSA typically draws the gas through the separation process with a vacuum. The goal of the O2 VSA process is to efficiently capture the nitrogen and other contaminants while allowing the O2 to pass through unencumbered where it will be delivered as the final product.

Generally, higher recovery leads to a smaller compressor, blower, or other compressed gas or vacuum source and lower power consumption. Air is filtered to remove particulates before it enters the feed air blower and is introduced to the adsorber vessels. Higher productivity leads to smaller sieve beds. The consumer will most likely consider indices that have a more directly measurable difference in the overall system, like the amount of product gas divided by the system weight and size, the system’s initial and maintenance costs, the system power consumption or other operational costs, and reliability.