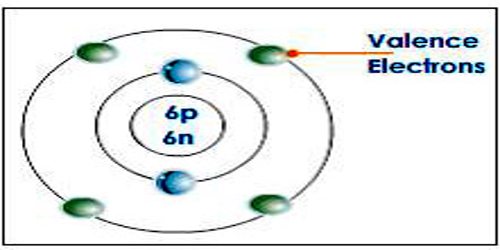 Similar to an electron in an inner shell, a valence electron has the ability to absorb or release energy in the form of a photon. An energy gain can trigger an electron to move (jump) to an outer shell; this is known as atomic excitation. Or the electron can even break free from its associated atom’s valence shell; this is ionization to form a positive ion. When an electron loses energy, then it can move to an inner shell which is not fully occupied.

Examples: Magnesium’s ground state electron configuration is 1s22s2p63s2, the valence electrons would be the 3s electrons because 3 is the highest principle quantum number. Each atom occupies an orbital in a certain order. This is called the spdf notation. The periodic table is divided into s, p, d, and f blocks.

However, transition elements have partially filled (n − 1)d energy levels, that are very close in energy to the ns level. So as opposed to main group elements, a valence electron for a transition metal is defined as an electron that resides outside a noble-gas core. Thus, generally, the d electrons in transition metals behave as valence electrons although they are not in the valence shell. For example, manganese (Mn) has configuration 1s2 2s2 2p6 3s2 3p6 4s2 3d5; this is abbreviated to [Ar] 4s2 3d5, where [Ar] denotes a core configuration identical to that of the noble gas argon. In this atom, a 3d electron has energy similar to that of a 4s electron, and much higher than that of a 3s or 3p electron. In effect, there are possibly seven valence electrons (4s2 3d5) outside the argon-like core; this is consistent with the chemical fact that manganese can have an oxidation state as high as +7 (in the permanganate ion: MnO−4).

Gallium has the following electron configuration.

The 4s and 4p electrons can be lost in a chemical reaction, but not the electrons in the filled 3d subshell. Gallium therefore has three valence electrons. The most reactive kind of metallic element is an alkali metal of group 1 (e.g., sodium or potassium); this is because such an atom has only a single valence electron; during the formation of an ionic bond which provides the necessary ionization energy, this one valence electron is easily lost to form a positive ion (cation) with a closed shell (e.g., Na+ or K+). An alkaline earth metal of Group 2 (e.g., magnesium) is somewhat less reactive, because each atom must lose two valence electrons to form a positive ion with a closed shell (e.g., Mg2+).

Valence electrons are also responsible for the electrical conductivity of an element; as a result, an element may be classified as a metal, a nonmetal, or a semiconductor (or metalloid).