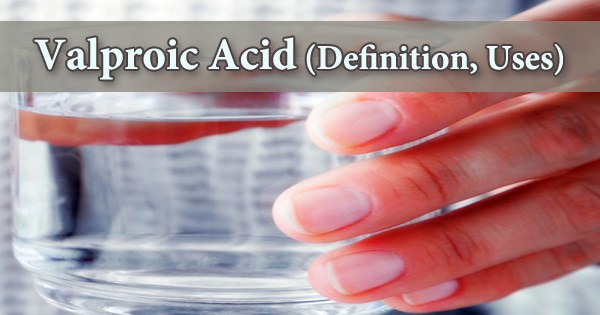 Valproate (VPA), as well as its valproic acid, sodium valproate, and valproate semisodium derivatives, is a synthetic derivative of propylpentanoic acid with antiepileptic and antiangiogenesis characteristics. These acids are used to treat epilepsy and bipolar illness, as well as to prevent migraine migraines. They can help people with absence seizures, partial seizures, and generalized seizures avoid having seizures. Valproic acid appears to work in epilepsy by raising the amount of gamma-aminobutyric acid (GABA) in the brain. The inhibition of histone deacetylases and nitric oxide synthase, which results in the suppression of nitric oxide generation, may be linked to this agent’s anticancer and antiangiogenesis properties.

Valproic acid and its salts are a new class of antiepileptic medications that differ structurally and in terms of mechanism of action from previously used treatments. Nausea, vomiting, drowsiness, and dry mouth are all common valproate side effects. Because serious adverse effects such as liver failure can occur, continuous monitoring of liver function tests is recommended. It is thought to have an effect on the GABA system’s metabolism. Pancreatitis and an increased chance of suicide are two other significant concerns.

Valproate is known to cause major birth defects in newborns when used during pregnancy, hence it is not normally suggested for migraine sufferers who are of childbearing age. Beverly S. Burton first synthesized it in 1881 as a fatty acid derivative and anticonvulsant. For nearly a century, it has been a prominent organic solvent in industry and pharmaceutical manufacturing. The exact mechanism of action of valproate is unknown. GABA levels are thought to be affected, as well as voltage-gated sodium channels being blocked and histone deacetylases being inhibited.

Valproic acid is a valeric acid-derived branching short-chain fatty acid (SCFA). This medicine not only has anticonvulsant properties, but it also improves the patient’s mental state. Valproate has been shown to be effective in the treatment of hostility in patients with acute alcohol-related hallucinosis or schizophrenia, as well as in the treatment of impulsive/aggressive behaviors, either alone or in the context of concomitant bipolar illness or personality disorder. Valproate’s efficacy in depressive disorders, schizophrenia, pathological gambling, benzodiazepine/ cannabis/ cocaine dependence, and acute alcohol withdrawal is limited, according to available research.

Valproic acid is a saturated branched-chain fatty acid with a propyl substituent on a pentanoic acid stem. George Carraz made an accidental discovery in 1963 while researching the anticonvulsant properties of khelline when he discovered that all of his samples, when dissolved in valproic acid, had the same level of anticonvulsant action. It was first approved by the FDA on February 28, 1978, under the trade name Depakene. It is a generic drug that is on the World Health Organization’s List of Essential Medicines.

Valproic acid is a white liquid with a clear appearance. It functions as an anticonvulsant, GABA agent, EC 3.5.1.98 (histone deacetylase) inhibitor, teratogenic agent, psychiatric medication, neuroprotective drug, and antimanic drug. It’s an organic weak acid with valproate as the conjugate base. Sodium valproate is the acid’s sodium salt, while valproate semisodium is a coordination complex of the two. Valproate, also known as valproic acid, is a branched-chain organic acid that is used to treat epilepsy, bipolar disorder, and migraine headaches. It is also a well-known cause of a variety of acute and chronic liver injuries.

Valproate has been linked to negative effects on the neurological system and other systems. It has a wide range of anticonvulsant properties, although it’s most commonly used as a first-line treatment for tonic-clonic seizures, absence seizures, and myoclonic seizures, as well as a second-line treatment for partial seizures and infantile spasms. It’s also been used to treat status epilepticus when taken intravenously. At therapeutically relevant quantities, valproic acid has been demonstrated to block voltage-dependent sodium channels.

Valproate has been demonstrated to help with migraine headaches and complicated partial seizures. In bipolar mania, it also helps symptom control. Valproic acid may be effective in treating the symptoms of the dopamine dysregulation syndrome that occur from the treatment of Parkinson’s disease with levodopa, according to five case reports. Valproate has been shown to inhibit T-calcium channels, which could be relevant in its mechanism of action in patients with absence epilepsy.

Valproic acid can impede its own metabolism at high dosages. It can also displace phenytoin from plasma protein binding sites, resulting in an increase in unbound phenytoin and phenytoin toxicity. Valproate has been discovered to be a non-competitive direct inhibitor of long-chain fatty acyl-CoA synthetase in brain microsomes. Because of its histone-deacetylase-inhibiting properties, the drug has been explored in the treatment of AIDS and cancer.

Hepatic failure is the most serious side effect related with valproic acid. Valproate can cause serious birth abnormalities, including neural tube anomalies (e.g., spina bifida). Valproate should not be given to a woman of childbearing age unless it is absolutely necessary for the treatment of her medical condition. This is especially true when valproate is being investigated for a condition that isn’t normally linked to permanent harm or death (e.g., migraine). Valproic acid can also cause mydriasis, or pupil dilatation. Valproic acid may raise the risk of polycystic ovarian syndrome (PCOS) among women with epilepsy or bipolar disorder, according to research.

In roughly 5% of people, valproic acid causes hair loss, but this is reversible. Some modest behavioral effects have been documented, as well as transient gastrointestinal symptoms. Periodic plasma concentration assessments of valproate and concomitant medications are indicated during the early course of therapy because valproate may interact with simultaneously administered medicines capable of enzyme induction. Valproic acid is not a CNS depressant, but when combined with phenobarbital, primidone, benzodiazepines, or other CNS depressants, it can cause greater depression.