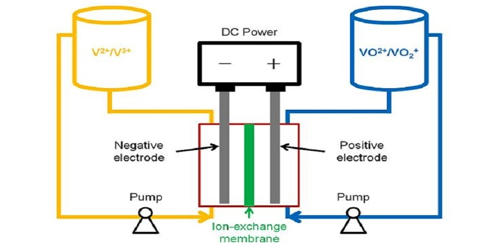 Vanadium-flow batteries (VRB) are a viable option for large-scale storage because they are able to provide hundreds of megawatt-hours at grid scale. It also is known as the vanadium flow battery (VFB) or vanadium redox flow battery (VRFB), is a type of rechargeable flow battery that employs vanadium ions in different oxidation states to store chemical potential energy.  That means they can be charged thousands of times without losing capacity while holding large amounts of energy. V-flow batteries are fully containerized, nonflammable, compact, reusable over semi-infinite cycles, discharge 100% of the stored energy, and do not degrade for more than 20 years.

The vanadium redox battery exploits the ability of vanadium to exist in solution in four different oxidation states and uses this property to make a battery that has just one electroactive element instead of two. Makers of vanadium flow batteries have hoped for mass-commercialization of longer-duration energy storage for twenty years but have never been able to reach volumes of scale. For many years, vanadium-flow batteries have been a favored technology to enter the energy storage space in a serious way, and the London-based firm forecasts that it could become a major player in the market, second to lithium-ion batteries. V-flow batteries use the multiple valence states of just vanadium to store and release charges. For several reasons, including their relative bulkiness, most vanadium batteries are currently used for grid energy storage, i.e., attached to power plants or electrical grids.

This type of battery makes sense where three conditions are met:

The possibility of creating a vanadium flow battery was explored by Pissoort in the 1930s, NASA researchers in the 1970s, and Pellegri and Spaziante in the 1970s, but none of them were successful in demonstrating the technology. Vanadium redox flow battery (VRFB) systems are the most developed among flow batteries because of their active species remaining in solution at all times during charge/discharge cycling, their high reversibility, and their relatively large power output. The first successful demonstration of the all-vanadium redox flow battery which employed vanadium in a solution of sulfuric acid in each half was by Maria Skyllas-Kazacos at the University of New South Wales in the 1980s. Her design used sulfuric acid electrolytes and was patented by the University of New South Wales in Australia in 1986.

Vanadium redox flow batteries (VRFB) are one of the emerging energy storage techniques being developed with the purpose of effectively storing renewable energy. Numerous companies and organizations are involved in funding and developing vanadium redox batteries. These batteries are rather large and best suited to industrial and utility-scale applications. They could never fit in an electric car, so the Tesla battery is safe for now. But the V-flow battery outcompetes Li-ion, and any other solid battery, for utility-scale applications.