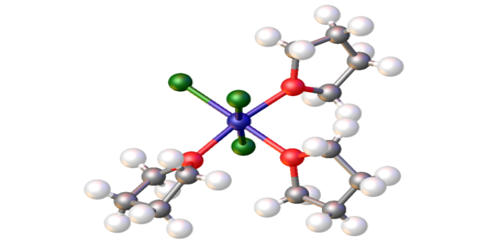 Vanadium tetrachloride is the inorganic compound with the formula VCl4. appears as a red liquid with a pungent odor. This bright red liquid serves as a useful reagent for the preparation of other vanadium compounds. It is a thick reddish-brown liquid that gives off fumes on exposure to moist air.

VCl4 is prepared by chlorination of vanadium metal. VCl5 does not form in this reaction; Cl2 lacks the oxidizing power to attack VCl4. VCl5 can however be prepared indirectly from VF5 at −78 °C. In contrast, the heavier analogues NbCl5 and TaCl5 are stable and not particularly oxidizing. VF5 can be prepared directly by fluorination of vanadium metal, reflecting the increased oxidizing power of F2 vs Cl2. Indicative of its oxidizing power, VCl4 releases Cl2 at its boiling point (standard pressure) to afford VCl3. Boiling point 309.2°F (154°C).

Vanadium Chloride is generally immediately available in most volumes. Consistent with its high oxidizing power, VCl4 reacts with HBr at -50 °C to produce VBr3. The reaction proceeds via VBr4, which releases Br2 during warming to room temperature.

VCl4 forms adducts with many donor ligands, for example, VCl4(THF)2.

It is the precursor to vanadocene dichloride. They are formed through various chlorination processes whereby at least one chlorine anion (Cl-) is covalently bonded to the relevant metal or cation.

Vanadium(IV) Chloride is an excellent water-soluble crystalline Vanadium source for uses compatible with chlorides. Chloride compounds can conduct electricity when fused or dissolved in water. It is used as a fixative in textile dyeing and in the manufacture of other Vanadium compounds.