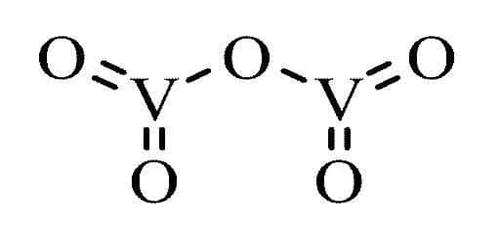 Vanadium(V) Oxide is a highly insoluble thermally stable Vanadium source suitable for glass, optic, and ceramic applications. It is the inorganic compound with the formula V2O5. It appears as a yellow to red crystalline powder. Slightly soluble in water and denser than water. Commonly known as vanadium pentoxide, it is a brown/yellow solid, although when freshly precipitated from aqueous solution, its color is deep orange.

Vanadium oxide nanoparticles appear in the form of a black powder having a spherical surface. Because of its high oxidation state, it is both an amphoteric oxide and an oxidizing agent. From the industrial perspective, it is the most important compound of vanadium, being the principal precursor to alloys of vanadium and is a widely used industrial catalyst.

The mineral form of this compound, shcherbinaite, is extremely rare, almost always found among fumaroles. A mineral trihydrate, V2O5·3H2O, is also known under the name of navajoite. Vanadium Oxide is also available in pellets, pieces, powder, sputtering targets, tablets, and nanopowder.

Vanadium pentoxide is an intermediate in recovering vanadium from minerals. Technical grade V2O5 is produced as a black powder used for the production of vanadium metal and ferrovanadium. Pentoxide is prepared in purified form by dissolving red cake in sodium carbonate solution followed by the addition of an aqueous solution of ammonia and ammonium chloride. A vanadium ore or vanadium-rich residue is treated with sodium carbonate and an ammonium salt to produce sodium metavanadate, NaVO3. This material is then acidified to pH 2–3 using H2SO4 to yield a precipitate of “red cake”. The red cake is then melted at 690 °C to produce the crude V2O5. Ammonium metavanadate is precipitated which on decomposition at 320 to 430°C forms vanadium pentoxide.

Vanadium(V) oxide is produced when vanadium metal is heated with excess oxygen, but this product is contaminated with other, lower oxides. A more satisfactory laboratory preparation involves the decomposition of ammonium metavanadate at 500-550 °C: 2 NH4VO3 → V2O5 + 2 NH3 + H2O.

Vanadium oxide is used extensively as a catalyst in many industrial chemical reactions. It is also used in the following applications:

Contact may cause severe irritation to the skin, eyes, and mucous membranes. May be toxic by ingestion, inhalation, and skin absorption.