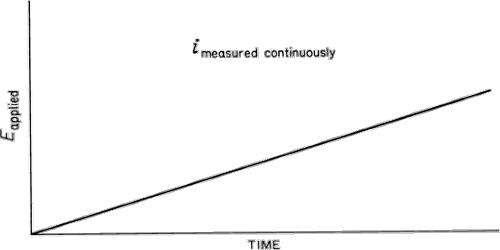 Voltammetry is a technique used to detect neurochemicals capable of undergoing oxidation reactions. It is a category of electroanalytical methods used in analytical chemistry and various industrial processes. It is based on the measurement of a current response as a function of the potential applied to a voltammetric cell. The voltammetric methods comprise the combination of voltage with amperometry (i.e., with the measurement of electric current flowing through the cell).

Voltammetry is an electrochemical technique that is extensively used in the enzyme-based biosensor. In voltammetry, information about an analyte is obtained by measuring the current as the potential is varied. The analytical data for a voltammetric experiment comes in the form of a voltammogram that plots the current produced by the analyte versus the potential of the working electrode. The opposite way in voltammetry represents the procedure forcing the current through the cell and recording the voltage response.

Voltammetry refers to electrochemical methods in which a specific voltage profile is applied to a working electrode as a function of time and the current produced by the system is measured. Cyclic voltammetry, the most common format of voltammetry, is extensively applied in enzyme-based voltammetry biosensors. It is an electrochemical technique in which a varying potential is applied to a working electrode in an electrochemical system, and the corresponding current is measured. This is commonly done with an instrument called a potentiostat, which for these measurements is capable of applying variable potentials to the working electrode relative to a reference electrode (like Ag/AgCl) while measuring the current that flows as a result of the electrode reaction.

Voltammetric methods typically involve the use of microelectrodes that frequently have areas on the order of 0.3-10 cm2. Originally it was common to use mercury electrodes often as a hanging mercury drop (HMDE) or as drops through a glass capillary (DME) for voltammetric methods. An important consideration in voltammetric methods is the process by which species in solution move up to the surface of the electrode, where if electroactive, they can be oxidized or reduced. There are three general processes by which ions move in solution: diffusion, convection, and electrostatic migration. Diffusion involves the random motion of species in solution. Convection is a physical movement created by something like a magnetic stir bar. Electrostatic migration results from the attraction of a positive species towards a negatively charged electrode or alternatively the attraction of a negative species toward a positively charged electrode.