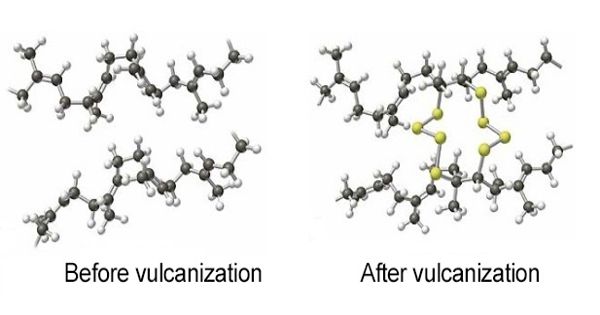 Vulcanization – a range of processes for hardening rubbers

Vulcanization refers to a range of processes for hardening rubbers. It is the process of treating crude or synthetic rubber or similar plastic material chemically to give it useful properties (such as elasticity, strength, and stability). The term originally referred exclusively to the treatment of natural rubber with sulfur, which remains the most common practice. It is the process of treating rubber or plastic with chemicals so that it becomes stronger, more stable, or has more elasticity.

Vulcanization is a process that involves the use of chemicals to change natural rubber into a stronger, more durable substance.

Vulcanization of rubber is a process designed to improve the elasticity of rubber and strength via the presence of sulfur and heating, which changes the structure of the rubber molecules. It has also grown to include the hardening of other (synthetic) rubbers via various means. In its natural state, rubber is somewhat elastic and not as strong as it could be. Examples include silicone rubber via room temperature vulcanizing and chloroprene rubber (neoprene) using metal oxides. It is a chemical process by which the physical properties of natural or synthetic rubber are improved; finished rubber has higher tensile strength and resistance to swelling and abrasion, and is elastic over a greater range of temperatures.

Vulcanization can be defined as the curing of elastomers, with the terms ‘vulcanization’ and ‘curing’ sometimes used interchangeably in this context. Once the rubber has been vulcanized, it can be used commercially due to its durability, strength, and its non-stick properties. It works by forming cross-links between sections of polymer chain which results in increased rigidity and durability, as well as other changes in the mechanical and electrical properties of the material. Vulcanized rubber is used to make a variety of items, including the soles of shoes, hoses, hockey pucks, bowling balls, toys, tires, bouncing balls, and much more

Vulcanization, in common with the curing of other thermosetting polymers, is generally irreversible. Each process for vulcanization is detailed and very thorough, meaning you need to know what you are doing to avoid danger or ruining the end result. The process involves the formation of cross-links between long rubber molecules so as to achieve improved elasticity, resilience, tensile strength, viscosity, hardness and weather resistance.

The word vulcanization is derived from Vulcan, the Roman god of fire and forge.