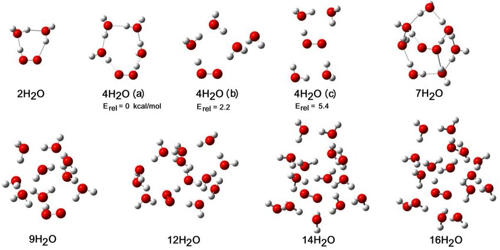 Clustering is the task of dividing the population or data points into a number of groups such that data points in the same groups are more similar to other data points in the same group than those in other groups. In chemistry, a water cluster is a discrete hydrogen-bonded assembly or cluster of molecules of water. An efficient mixed molecular dynamics/quantum mechanics model has been applied to the water cluster system. Many such clusters have been predicted by theoretical models (in silico), and some have been detected experimentally, in various contexts such as ice, and bulk liquid water, in the gas phase, in dilute mixtures with non-polar solvents, and as the water of hydration in crystal lattices. A surge of progress in both laser spectroscopy experiments and theoretical dynamics methods have facilitated new, highly detailed studies of water clusters. The simplest example is the water dimer (H2O)2.

Extensive terahertz laser vibration-rotation-tunneling spectra and mid-IR laser spectra have been compiled for several isotopomers of small (dimer through hexamer) water clusters. Water (H2O) is the third most common molecule in the Universe (after H2 and CO), the most abundant substance on earth and the only naturally occurring inorganic liquid, a billion cubic kilometers of which reside in our oceans and 50 tons of which pass through our bodies in our lifetimes.

(1). We do not yet have a satisfactory molecular description of how a proton moves in the liquid, we do not fully understand the molecular nature of the surfaces of either ice or liquid water

(2), nor do we understand the origin of the intriguing anomalies and singularities found in the deeply supercooled region

(3). Although it is clear that the hydrogen bond network and its fluctuations and rearrangement dynamics determine the properties of the liquid, no experimental studies exist that reveal detailed information on a molecular level without considerable interpretation

Water clusters have been proposed as an explanation for some anomalous properties of water, such as the unusual variation of density with temperature. This water performs many functions, and it can never be considered merely as an inert diluent; it transports, lubricates, reacts, stabilizes, signals, structures, and partitions. Water clusters are also implicated in the stabilization of certain supramolecular structures. The living world should be thought of as an equal partnership between biological molecules and water. They are expected to play a role also in the hydration of molecules and ions dissolved in water. Both short-range (< 1nm) and long-range (> 100 nm) [2268] organization of the water molecules has been detected.