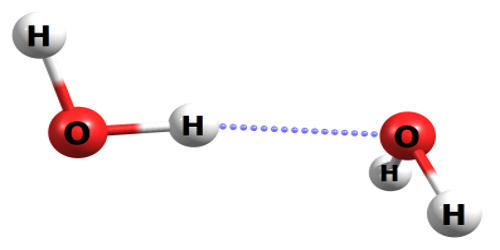 The dimer is a structure containing two identical or similar units. These units may be associated by covalent bonding or by noncovalent forces. The water dimer consists of two water molecules loosely bound by a hydrogen bond. It is the smallest water cluster. Typically, in the ambient atmosphere, there is over one water dimer for every thousand free water molecules rising to about one in twenty in steam. Because it is the simplest model system for studying hydrogen bonding in water, it has been the target of many theoretical studies that it has been called a “theoretical Guinea pig”. Water dimers contribute significantly to the continuum absorption of atmospheric water vapor that is important for our warm climate as it absorbs longwave radiation that would otherwise radiate out to space.

The spatial separation of water dimers from water monomers and larger water clusters through the electric deflector is presented.  The energetic and electronic structure of various water dimer isomers has been explored through DFT methodology. Six different possible water dimers come in two broad categories, planar and non-planar. In each of the categories, three distinct topologies (i) linear, (ii) ring, and (iii) bifurcated, have been obtained.

The ab initio binding energy between the two water molecules is estimated to be 5-6 kcal/mol, although values between 3 and 8 have been obtained depending on the method. A beam of water dimers with 93% purity and rotational temperature of 1.5 K was obtained. The experimentally measured dissociation energy (including nuclear quantum effects) of (H2O)2 and (D2O)2 are 3.16 ± 0.03 kcal/mol (13.22 ± 0.12 kJ/mol) and 3.56 ± 0.03 kcal/mol (14.88 ± 0.12 kJ/mol), respectively. Following strong-field ionization using a 35 fs laser pulse with a wavelength centered around 800 nm and a peak intensity of 1014 W/cm2, we observed proton transfer and 46% of ionized water dimers broke apart into hydronium ions H3O+ and neutral OH. The values are in excellent agreement with calculations. The O-O distance of the vibrational ground-state is experimentally measured at ca. 2.98 Å; the hydrogen bond is almost linear, but the angle with the plane of the acceptor molecule is about 57°.

For example, the water-monomer and the water-dimer signals at m/q = 18 u/e and 36 u/e, respectively, contained contributions due to the fragmentation of larger water clusters in the molecular beam. The vibrational ground-state is known as the linear water dimer (shown in the figure to the right), which is a near prolate top (viz., in terms of rotational constants, A > B ≈ C). Other configurations of interest include the cyclic dimer and the bifurcated dimer. The fragmentation ratios of the water dimer into smaller masses could be estimated and used for the calculation of the fraction of the water dimer in the deflected and undeflected molecular beam.