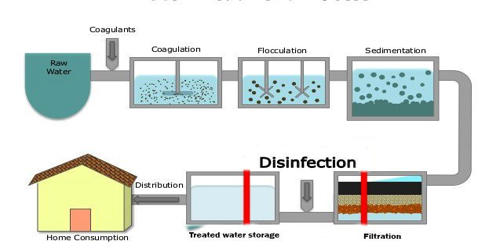 Water purification is the process by which water is treated so that it can be consumed by human beings without there being a risk to health. It is the process of removing undesirable chemicals, biological contaminants, suspended solids, and gases from water. That process also includes distillation and deionization (ion removal through the extraction of dissolved salts). The goal is to produce water fit for specific purposes. One major purpose of water purification is to provide clean drinking water. Most water is purified and disinfected for human consumption (drinking water), but water purification may also be carried out for a variety of other purposes, including medical, pharmacological, chemical, and industrial applications.

Water purification may reduce the concentration of particulate matter including suspended particles, parasites, bacteria, algae, viruses, and fungi as well as reduce the concentration of a range of dissolved and particulate matter. In essence, it aims to eliminate any potential risk to the health of people. The standards for drinking water quality are typically set by governments or by international standards. These standards usually include minimum and maximum concentrations of contaminants, depending on the intended use of the water. Water treatment is often necessary if surface water supplies, and sometimes groundwater supplies, are to be available for human use. Simple procedures such as boiling or the use of a household charcoal filter are not sufficient for treating water from an unknown source.

Water purification is the removal of contaminants from raw water to produce drinking water that is pure enough for human consumption or for industrial use. Visual inspection cannot determine if the water is of appropriate quality. Simple procedures such as boiling or the use of a household activated carbon filter are not sufficient for treating all possible contaminants that may be present in water from an unknown source. Substances that are removed during the process include parasites, bacteria, algae, viruses, fungi, minerals, and man-made chemical pollutants. Chemical and microbiological analysis, while expensive, is the only way to obtain the information necessary for deciding on the appropriate method of purification. Many contaminants can be dangerous—but depending on the quality standards, others are removed to improve the water’s smell, taste, and appearance. Surface water sources should be carefully monitored for the presence of unusual types or levels of microbial/disease-causing contaminants.