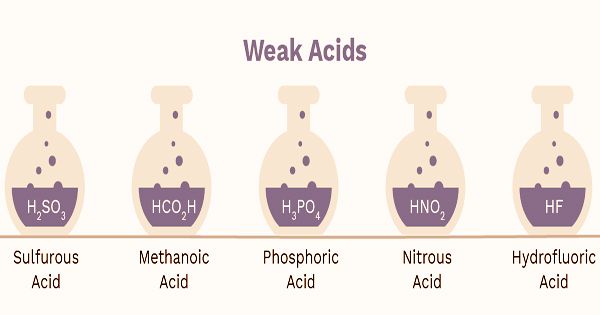 As it is dissolved in a solution, a weak acid is a substance that partly dissociates. It is an acid that in an aqueous solution or water dissociates partly into its ions. There is a balance in the solution between the acid, HA, and dissociation products.

For example, for acetic acid, the chemical reaction takes the form:

Acids that are weak are much more common than acids that are strong. For starters, they are found in vinegar (acetic acid) and lemon juice (citric acid) in everyday life. 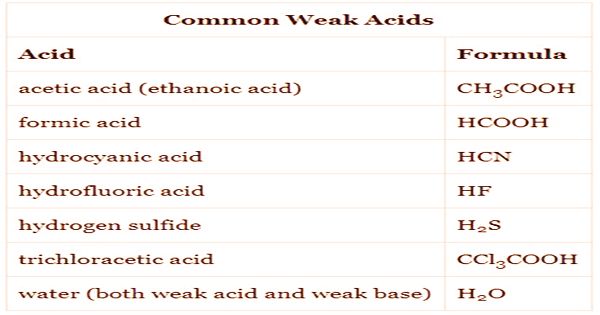 Nitrous acid is in harmony with NO2–, a proton, and its conjugate base. Since the water concentration is constant, we can describe a constant equal to the product of the water concentration and the constant of equilibrium. For HNO2, this constant, the Ka, is 10-3.29. When the numerical value of Ka is determined, by applying the law of mass conservation, it can be used to calculate the degree of dissociation in a solution with a given acid concentration, TH.

Weak acids form when the polarity between the hydrogen atom and the other atom in the bond is not sufficient to allow the hydrogen ion to be easily extracted. The size of the atom bonded to hydrogen is another factor which influences the strength of an acid. The strength of the bond between the two atoms is diminished as the size of the atom increases. This makes it easier to sever the hydrogen release bond and increases the acid’s strength. Acetic acid and phosphorous acid are common examples of weak acids. An acid such as oxalic acid (HOOC-COOH) is called dibasic because it can lose two protons and react with a simple base of two molecules.