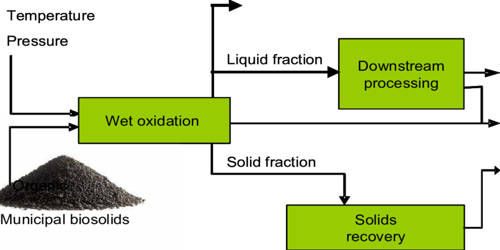 Wet oxidation is a form of hydrothermal treatment. It is the oxidation of dissolved or suspended components in water using oxygen as the oxidizer. It is a pretreatment technology using water and air or oxygen to fractionate biomass at temperatures above 120 °C. It is referred to as “Wet Air Oxidation” (WAO) when air is used. It is an oxidative pretreatment method which employs oxygen or air as a catalyst. The oxidation reactions occur in superheated water at a temperature above the normal boiling point of water (100 °C), but below the critical point (374 °C). A clear advantage of wet oxidation, in particular in combination with the alkali, is the relatively mild temperature and the limited formation of fermentation inhibitors.

The system must be maintained under pressure to avoid excessive evaporation of water. This is done to control energy consumption due to the latent heat of vaporization.  When oxygen is not added, the process is similar to a hydrothermal pretreatment and comparable to the well-known steam explosion pretreatment. It is also done because liquid water is necessary for most of the oxidation reactions to occur. Compounds oxidize under wet oxidation conditions that would not oxidize under dry conditions at the same temperature and pressure. The addition of oxygen at temperatures above 170 °C makes the process exothermic reducing the total energy demand. Wet oxidation can be combined with other pretreatment methods to further increase the yield of sugars after enzymatic hydrolysis.

Wet oxidation facilitates the separation of cellulose after the majority of hemicelluloses and lignin has been solubilized. It has been used commercially for around 60 years. It is used predominantly for treating wastewater. The amount of lignin removed after pretreatment ranges from 50% to 70% depending on the type of biomass pretreated and the conditions used. It is often referred to as Zimpro (from ZIMmerman PROcess), after Fred J. Zimmermann who commercialized it in the mid 20th century. It is effective in pretreating a variety of biomass such as wheat straw, corn stover, sugarcane bagasse, cassava, peanuts, rye, canola, faba beans, and reed