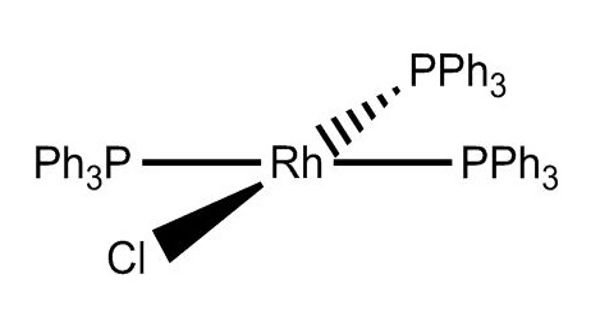 Wilkinson’s catalyst is a pre-catalyst that is converted to an active form by losing one triphenylphosphine ligand before entering the catalytic cycle. It is the common name for chloridotris (triphenylphosphine)rhodium(I), a coordination complex of rhodium with the formula [RhCl(PPh3)3] (Ph = phenyl). A catalyst is defined as a substance that accelerates the rate of achieving chemical equilibrium, and which can be recovered unchanged at the end of a reaction.

Wilkinson’s Catalyst is a coordination compound whose coordination center is rhodium. It is extensively used as a catalyst in the hydrogenation of alkenes.

Wilkinson’s catalyst can be prepared by reacting hydrated rhodium(III) chloride with excess triphenylphosphine in the presence of ethanol (which acts as a refluxing agent). The compound is widely used as a catalyst for the hydrogenation of alkenes. It is named after chemist and Nobel laureate Sir Geoffrey Wilkinson, who first popularized its use. 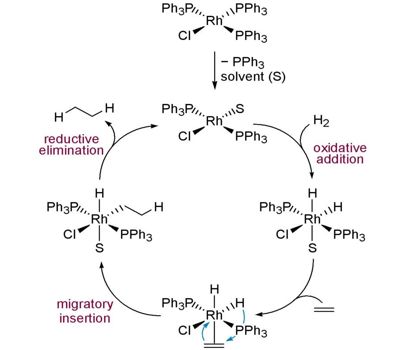 It can be noted that as per single-crystal X-ray diffraction studies, the structure adopted by Wilkinson’s Catalyst is square planar (slightly distorted). The rhodium center is bound to four ligands in this compound. Historically, Wilkinson’s catalyst has been a paradigm in catalytic studies leading to several advances in the field such as the implementation of some of the first heteronuclear magnetic resonance studies for its structural elucidation in solution (31P), parahydrogen-induced polarization spectroscopy to determine the nature of transient reactive species or one of the first detailed kinetic investigation by Halpern to elucidate the mechanism.

Wilkinson’s catalyst can be employed for the hydro acylation of alkenes. The cool thing about Wilkinson’s catalyst is its ability to selectively reduce alkenes or double bonds. Furthermore, the catalytic and organometallic studies on Wilkinson’s catalyst also played a significant role in the subsequent development of cationic Rh- and Ru-based asymmetric hydrogenation transfer catalysts which set the foundations for modern asymmetric catalysis. The selectiveness makes it useful when we need to reduce a specific double bond in a molecule.