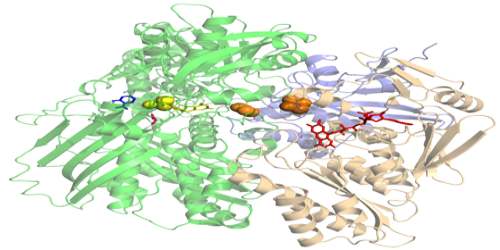 Xanthine oxidase is an iron-molybdenum flavoprotein, which is containing FLAVIN-ADENINE DINUCLEOTIDE that oxidizes hypoxanthine, some other purines and pterins, and aldehydes. Deficiency of the enzyme, an autosomal recessive trait, causes xanthinuria.

Xanthine oxidase can also act on certain other purines, pterins, and aldehydes. For example, it efficiently converts 1-methylxanthine (a metabolite of caffeine) to 1-methyluric acid, but has little activity on 3-methylxanthine. Bovine xanthine oxidase (from milk) was originally thought to have a binding site to reduce cytochrome c with, but it has been found that the mechanism to reduce this protein is through XO’s superoxide anion byproduct, with competitive inhibition by carbonic anhydrase.

Another reaction catalyzed by xanthine oxidase is the decomposition of S-Nitrosothiols (RSNO), a reactive nitrogen species, to nitric oxide (NO), which reacts with a superoxide anion to form peroxynitrite under aerobic conditions. Xanthine oxidase and xanthine dehydrogenase are enzymes involved in the metabolism of purines and pyrimidines in various organisms. Their relationship to one another has been the subject of considerable debate, primarily because of their proposed roles in ischemia/reperfusion damage in tissues. The protein is large, having a molecular weight of 270 kDa, and has 2 flavin molecules, 2 molybdenum atoms, and 8 iron atoms bound per enzymatic unit. The molybdenum atoms are contained as molybdopterin cofactors and are the active sites of the enzyme. The iron atoms are part of ferredoxin iron-sulfur clusters and participate in electron transfer reactions.

Xanthine Oxidase is a superoxide-producing enzyme found normally in serum and the lungs, and its activity is increased during influenza an infection. During severe liver damage, xanthine oxidase is released into the blood, so a blood assay for XO is a way to determine if liver damage has happened.