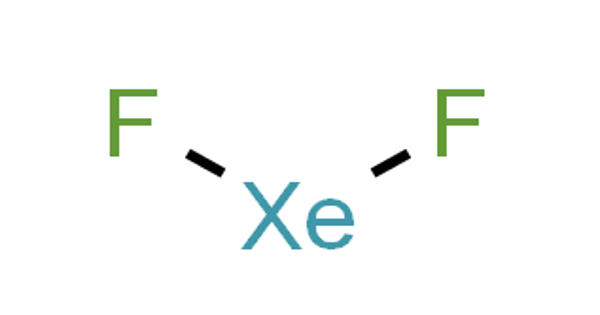 Xenon difluoride is a powerful fluorinating agent with the chemical formula XeF2, and one of the most stable xenon compounds. It was considered to be a possible convenient replacement for elemental fluorine especially in addition to reactions to a double bond. Like most covalent inorganic fluorides it is moisture-sensitive. The oxidation state of xenon in Xenon Difluoride is +2. It decomposes in contact with light or water vapor but is otherwise stable in storage. Xenon tetrafluoride has a negligible vapor pressure at -78° and about 3 mm-Hg at room temperature. Xenon difluoride is a dense, colourless crystalline solid. Xenon difluoride is a hazardous chemical, reacting with water moisture to form hydrofluoric acid.

It was discovered in the year 1962. It has a nauseating odour and low vapor pressure. It is a powerful fluoridating agent. It decomposes on contact with light or water vapour.

Xenon difluoride is a dense, white crystalline solid. It has a nauseating odour but low vapor pressure. It is a colorless crystalline solid, and can be sublimed at room temperature. It melts at 303 K. It is soluble in HF

Xenon difluoride is a strong fluorinating and oxidising agent and one of the most stable xenon compounds. It is a linear molecule with an Xe–F bond length of 197.73±0.15 pm in the vapor stage, and 200 pm in the solid phase. The packing arrangement in solid XeF2 shows that the fluorine atoms of neighbouring molecules avoid the equatorial region of each XeF2 molecule.

At high pressures, novel, non-molecular forms of xenon difluoride can be obtained. Under a pressure of ~50 GPa, XeF2 transforms into a semiconductor consisting of XeF4 units linked in a two-dimensional structure, like graphite. At even higher pressures, above 70 GPa, it becomes metallic, forming a three-dimensional structure containing XeF8 units.