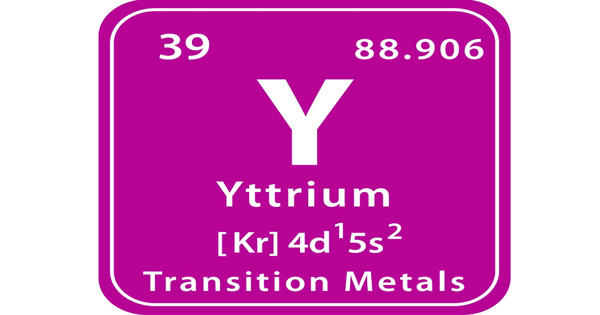 Yttrium is a chemical element with the symbol Y and atomic number 39. It is a highly crystalline iron-gray, rare-earth metal. It is a silvery-white, moderately soft, ductile metal. It is a silvery-metallic transition metal chemically similar to the lanthanides and has often been classified as a “rare-earth element”. It is quite stable in the air; rapid oxidation begins above approximately 450°C (840 °F), resulting in Y2O3.

“Yttrium is a silvery-metallic transition metal chemically similar to the lanthanides and has often been classified as a “rare-earth element”. It is found in almost all rare earth minerals and in uranium ores.”

The element was discovered in 1794 by Finnish chemist Johan Gadolin (1760-1852). The discovery of yttrium marked the beginning of one hundred years of complicated chemical research that resulted in the discovery of ten new elements.

Yttrium is almost always found in combination with lanthanide elements in rare-earth minerals and is never found in nature as a free element. It never occurs in nature as a free element. It is found in almost all rare earth minerals and in uranium ores. 89Y is the only stable isotope, and the only isotope found in the Earth’s crust. It has a melting point of 1,509°C (2,748°F) and a boiling point of about 3,000°C (5,400 F). Its density is 4.47 grams per cubic centimeter. 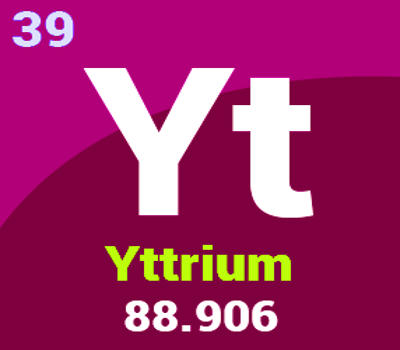 The most important uses of yttrium are LEDs and phosphors, particularly the red phosphors in television set cathode ray tube displays. Yttrium is also used in the production of electrodes, electrolytes, electronic filters, lasers, superconductors, various medical applications, and tracing various materials to enhance their properties.

Yttrium has no known biological role. Exposure to yttrium compounds can cause lung disease in humans. Commercially, yttrium is separated from the other rare-earth by liquid-liquid or ion-exchange extraction, and the metal is produced by metallothermic reduction of the anhydrous fluoride with calcium. Major applications include hosts for red phosphors for fluorescent lamps, color displays, and TV screens that use cathode-ray tubes. The radioactive isotope yttrium-90 has medical uses. It can be used to treat some cancers, such as liver cancer.

The name is historical and comes from the village of Ytterby, in Sweden where, in 1787, the famous chemist Arrhenius found a new mineral and named it ytterbite. In the igneous rocks of Earth’s crust, this element is more plentiful than any of the other rare-earth elements except cerium and is twice as abundant as lead. Yttrium also occurs in products of nuclear fission.