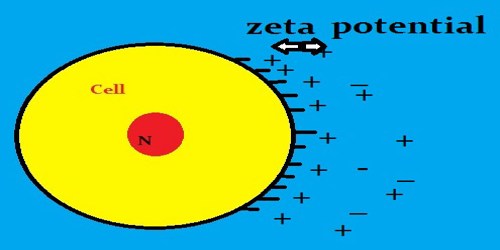 Zeta potential, also known as electrokinetic potential, is measured in millivolts (mV). It is the potential difference across phase boundaries between solids and liquids. It is usually denoted using the Greek letter zeta (ζ), hence ζ-potential. The zeta potential is the electric potential in the interfacial double layer (DL) at the location of the slipping plane relative to a point in the bulk fluid away from the interface. Since zeta potential is not equal to the electric surface potential in a double layer or to the Stern potential, it is often the only value that can be used to describe double-layer properties of a colloidal dispersion. It is widely used for quantification of the magnitude of the charge.

Zeta potential is a key indicator of the stability of colloidal dispersions. The magnitude of the zeta potential indicates the degree of electrostatic repulsion between adjacent, similarly charged particles in dispersion. Zeta potential cannot be directly measured. It is calculated from theoretical models or estimated experimentally, often based on electrophoretic mobility. Basically, to determine zeta potential, one tracks that rate at which a charged particle moves in response to an electric field. Particles that possess a zeta potential will migrate toward the opposite-charged electrode. The most known and widely used theory for calculating zeta potential from experimental data is that developed by Marian Smoluchowski in 1903. This theory was originally developed for electrophoresis; however, an extension to electroacoustics is now also available. Smoluchowski’s theory is powerful because it is valid for dispersed particles of any shape and any concentration. Since the physical properties of suspensions and colloids largely depend on the properties of the particle-liquid interface, knowing the zeta potential has practical applications.

Zeta potential measurements are used to:

The advantage of using an electroacoustic method to characterize zeta potential is that the sample does not need to be diluted.