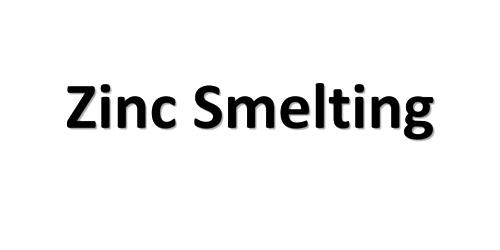 Zinc is found in the earth’s crust primarily as zinc sulfide (ZnS). Zinc smelting is the process of converting zinc concentrates (ores that contain zinc) into pure zinc. Zinc smelting has historically been more difficult than the smelting of other metals, e.g. iron because, in contrast, zinc has a low boiling point. The most common zinc concentrate processed is zinc sulfide, which is obtained by concentrating sphalerite using the froth flotation method. Primary uses for zinc include galvanizing of all forms of steel, as a constituent of brass, for electrical conductors, vulcanization of rubber, and in primers and paints.

At temperatures typically used for smelting metals, zinc is a gas that will escape from a furnace with the flue gas and be lost, unless specific measures are taken to prevent it. Secondary (recycled) zinc material, such as zinc oxide, is also processed with the zinc sulfide. Zinc ores typically may contain from 3 to 11 percent zinc, along with cadmium, copper, lead, silver, and iron. Beneficiation, or the concentration of the zinc in the recovered ore, is accomplished at or near the mine by crushing, grinding, and flotation process. Its most important use, as a protective coating for iron known as galvanizing, derives from two of its outstanding characteristics: it is highly resistant to corrosion, and, in contact with iron, it provides sacrificial protection by corroding in place of the iron. 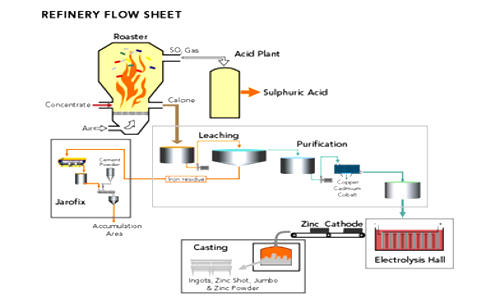 The most common zinc concentrate processed is zinc sulfide, which is obtained by concentrating sphalerite using the froth flotation method. Secondary (recycled) zinc material, such as zinc oxide, is also processed with the zinc sulfide. There are two methods of smelting zinc: the pyrometallurgical process and the hydrometallurgical process. Both methods are still used. Both of these processes have the same first step: roasting. Roasting is a process of oxidizing zinc sulfide concentrates at high temperatures into impure zinc oxide, called “Zinc Calcine”. The chemical reactions taking place during the process are:

The process of roasting varies based on the type of roaster used. There are three types of roasters: multiple-hearth, suspension, and fluidized-bed. Roasting is a high-temperature process that converts zinc sulfide concentrate to an impure zinc
oxide called calcine. Approximately 30% of all zinc produced is from recycled sources.