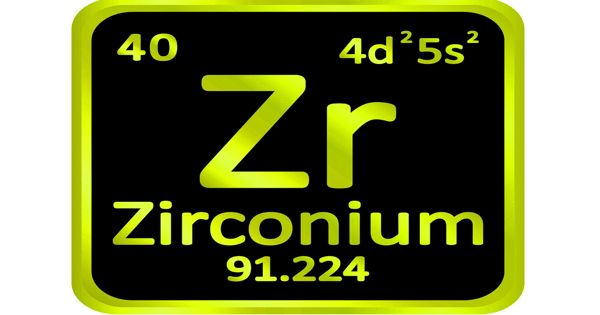 Zirconium is a chemical element with the symbol Zr and atomic number 40. It is a very strong, malleable, ductile, lustrous silver-gray metal. It is a fairly common element in the Earth’s crust. Its abundance is estimated to be 150 to 230 parts per million. The name zirconium is taken from the name of the mineral zircon, the most important source of zirconium. It is lighter than steel and its hardness is similar to copper. It is a lustrous, grey-white, strong transition metal that closely resembles hafnium and, to a lesser extent, titanium Zirconium compounds have no known biological role. It does not dissolve in acids and alkalis.

“Zirconium is highly resistant to corrosion by alkalis, acids, saltwater, and other agents. is mainly used as a refractory and opacifier, although small amounts are used as an alloying agent for its strong resistance to corrosion.” 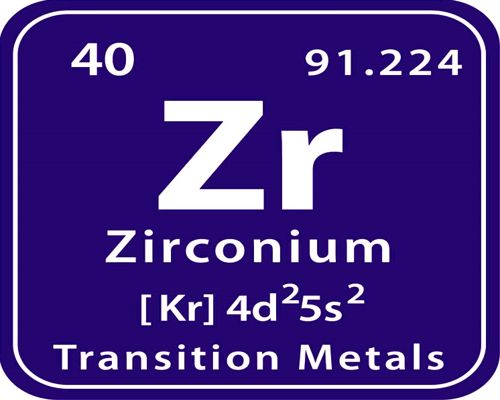 Zirconium is a lustrous, greyish-white, soft, ductile, malleable metal that is solid at room temperature, though it is hard and brittle at lesser purities. It is a hard, grayish-white, shiny metal. Its surface often has a flaky-like appearance. In powder form, zirconium is highly flammable, but the solid form is much less prone to ignition. It also occurs in the form of a black or bluish-black powder. Zirconium is highly resistant to corrosion by alkalis, acids, saltwater, and other agents. The largest suppliers of zirconium minerals in the world are Australia and South Africa. These two countries produce about 85 percent of the world’s zirconium.

The melting point of zirconium is 1855 °C (3371 °F), and the boiling point is 4371 °C (7900 °F). Zirconium has an electronegativity of 1.33 on the Pauling scale. It does not react with most cold acids or with water. It does react with some acids that are very hot, however. It is unlikely to present a hazard to the environment.

Zirconium is mainly used as a refractory and opacifier, although small amounts are used as an alloying agent for its strong resistance to corrosion. The most important use of zirconium is in nuclear reactors for cladding fuel rods, for alloying with uranium, and for reactor-core structures because of its unique combination of properties. Zirconium forms a variety of inorganic and organometallic compounds such as zirconium dioxide and zirconocene dichloride, respectively. The major end uses of zircon are refractories, ceramic opacification, and foundry sands. Zircon is also marketed as a natural gemstone used in jewelry.