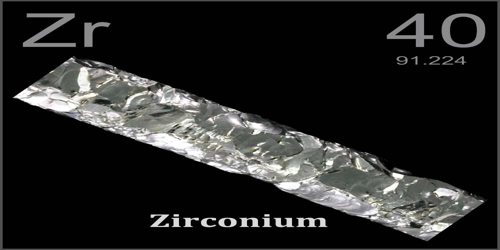 Zirconium is a shiny, grayish-white metallic element that occurs primarily in zircon. It is used to build nuclear reactors because of its ability to withstand bombardment by neutrons even at high temperatures. Its Atomic number 40; atomic weight 91.22; melting point 1,852°C; boiling point 4,377°C; specific gravity 6.56 (20°C); valence 2, 3, 4. Zirconium is also highly resistant to corrosion, making it a useful component of pumps, valves, and alloys. The name zirconium is taken from the name of the mineral zircon, the most important source of zirconium. The word zircon comes from the Persian word zargun زرگون, meaning “gold-colored”. It is a lustrous, grey-white, strong transition metal that resembles hafnium and, to a lesser extent, titanium.

The Swedish chemist Jöns Berzelius was the first to successfully isolate zirconium in 1824. However, it was not very pure. Totally pure zirconium was only produced in 1925 by the Dutch chemists Anton Eduard van Arkel and Jan Hendrik de Boer by the decomposition of zirconium tetraiodide (ZrI4). These days the metal is produced in bulk by heating zirconium tetrachloride (ZrCl4) with magnesium.

Occurrences, Production and Properties of Zirconium

Zirconium occurs in about 30 mineral species, the major ones being zircon and baddeleyite. More than 1.5 million tonnes of zircon are mined each year, mainly in Australia and South Africa. Most baddeleyite is mined in Brazil. The principal commercial source of zirconium is zircon (ZrSiO4), a silicate mineral, which is found primarily in Australia, Brazil, India, Russia, South Africa and the United States, as well as in smaller deposits around the world. Zirconium metal is produced commercially by first converting zircon to zirconium chloride, and then reducing the chloride with magnesium. Zirconium metal is much higher priced than zircon because the reduction processes are expensive. Its elements can be classified based on their physical states (States of Matter) e.g. gas, solid or liquid. This element is a solid. Zirconium is classified as a “Transition Metal” which are located in Groups 3 – 12 of the Periodic Table. Elements classified as Transition Metals are generally described as ductile, malleable, and able to conduct electricity and heat. Zirconium(IV) oxide is used in ultra-strong ceramics. It is used to make crucibles that will withstand heat-shock, furnace linings, foundry bricks, abrasives and by the glass and ceramics industries. It is so strong that even scissors and knives can be made from it. It is also used in cosmetics, antiperspirants, food packaging and to make microwave filters.

Zircon is a natural semi-precious gemstone found in a variety of colours. The most desirable have a golden hue. The element was first discovered in this form, resulting in its name. Cubic zirconia (zirconium oxide) is a synthetic gemstone. The colourless stones, when cut, resemble diamonds.

Although zirconium has no known biological role, the human body contains, on average, 250 milligrams of zirconium, and daily intake is approximately 4.15 milligrams (3.5 milligrams from food and 0.65 milligrams from water), depending on dietary habits. Zirconium is widely distributed in nature and is found in all biological systems, for example: 2.86 μg/g in whole wheat, 3.09 μg/g in brown rice, 0.55 μg/g in spinach, 1.23 μg/g in eggs, and 0.86 μg/g in ground beef. Further, zirconium is commonly used in commercial products (e.g. deodorant sticks, aerosol antiperspirants) and also in water purification (e.g. control of phosphorus pollution, bacteria- and pyrogen-contaminated water)