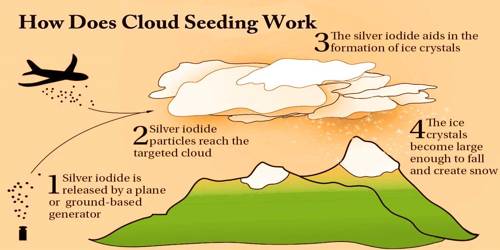 How Does Cloud Seeding Work

Clouds carry water. Unfortunately, that water doesn’t always get to where it’s needed on the ground. When the water molecules are spread out, they aren’t dense enough to feel Earth’s gravity. When the molecules huddle together, they form larger, heavier droplets. Eventually, they become heavy enough to fall to the ground as precipitation.

The concept of cloud seeding has been around since the 1940s when Bernard Vonnegut, American scientists at General Electric, discovered that silver iodide could produce ice crystals when introduced into cloud chambers. In those days, cloud seeding was heralded as a way to produce rain where there was none, boosting crop yields and filling reservoirs to the brim. But in the mountains, where the economy relies on snowfall, these same methods can be used to get an edge over rival resorts.

These particles act as additional condensation nuclei. Unattached supercooled water vapor molecules in the clouds condense around these particles. Then, the condensed water vapor droplets group together. This process continues until the droplets are large enough to fall as rain!

There are two ways of adding particles to clouds:

The most common chemicals used for cloud seeding include silver iodide, potassium iodide, and dry ice (solid carbon dioxide). Liquid propane, which expands into a gas, has also been used. This can produce ice crystals at higher temperatures than silver iodide. After promising research, the use of hygroscopic materials, such as table salt, is becoming more popular.

When cloud seeding, increased snowfall takes place when temperatures within the clouds are between −4 and 19 °F (−20 and −7 °C). The introduction of a substance such as silver iodide, which has a crystalline structure similar to that of ice, will induce freezing nucleation.

Cloud seeding is most commonly done out of airplanes. Planes fly into selected cloud formations and release packets of microscopic silver iodide particles using flares. When the particles meet cool moisture in the clouds, they trigger the formation of ice crystals and raindrops. The amount of silver iodide that is used is small enough to make sure that it doesn’t pose a pollution risk. And it’s important to plan things well. Since clouds don’t produce rain until 20 or 30 minutes after they have been seeded, one needs to make sure they deliver at the right place.

There are three methods can make cloud seeding work:

In mid-altitude clouds, the usual seeding strategy has been based on the fact that the equilibrium vapor pressure is lower over ice than over water. The formation of ice particles in supercooled clouds allows those particles to grow at the expense of liquid droplets. If sufficient growth takes place, the particles become heavy enough to fall as precipitation from clouds that otherwise would produce no precipitation. This process is known as “static” seeding.

Regardless, the types of clouds play a vital role in ensuring the process is successful. Large droplets are required if rain is expected to form, meaning maritime clouds are a better source of rain than continental clouds.

The temperature of the cloud is also important. For instance, cumulus and stratiform clouds, whose temperature is below -7°C, would be accompanied by precipitation within 25 minutes.

There are a lot of reasons to use cloud seeding. Ski resorts use it to increase snowfall. Hydroelectric companies do too because more snow means more runoff in the spring. And more runoff means more water for electricity.

Cloud seeding can also clear away fog by turning it into precipitation. This can help improve visibility around airports.

In Alberta, cloud seeding is used to manage hail. It increases the number of ice pellets in hail-producing clouds. But it also decreases the size of each pellet. This reduces the damage caused by hail.

Cloud seeding can’t create clouds. It can only add particles to clouds. These particles interact with the water vapor already present in the air. But China, Russia, and Thailand have successfully put out forest fires with cloud seeding. Scientists in Australia have also suggested using cloud seeding to get more water from clouds when it does rain, then saving that water for times of drought.

In 2003 the US National Research Council (NRC) released a report stating, “…science is unable to say with assurance which, if any, seeding techniques produce positive effects. In the 55 years following the first cloud-seeding demonstrations, substantial progress has been made in understanding the natural processes that account for our daily weather. Yet scientifically acceptable proof for significant seeding effects has not been achieved.”

“If you go up to the top of A-Basin after a storm, you should see white ice that has grown on the lift towers and in the trees,” Frank McDonough, an atmospheric scientist at the Desert Research Institute in Nevada, explained. “What’s happening there is the water drops are floating around in the cloud and as soon as they hit a structure, that structure serves as a spot for a freezing event. With cloud seeding, what you’re doing is throwing some dust-up in the cloud and creating the freezing in the cloud.”

Cloud seeding has been practiced by a number of countries including India, the United Arab Emirates, the United States, China, and the United Kingdom. China has used the technology dependently in dry areas of the country.

However, Jeff Tilley, director of weather modification at the Desert Research Institute in Reno, claimed in 2016 that new technology and research have produced reliable results that make cloud seeding a dependable and affordable water supply practice for many regions. Moreover, in 1998 the American Meteorological Society held that “precipitation from supercooled orographic clouds (clouds that develop over mountains) has been seasonally increased by about 10%.”

During the 2008 Beijing Summer Olympics and during the wedding of the Duke and Duchess of Cambridge, the technology was used to prevent rain.