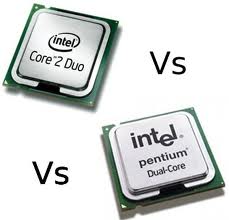 What is Dual Core?

There are several advantages to having a dual core processor. The first advantage is that your computer will use less energy and deliver more total performance from both its cores than a single high performance chip design. The second is that dual core processor caches will perform better than a two chip design. You will also need less space requirements, since the die for the dual cores are printed on one chip. There is no need to create two separate chips, thus saving space.

Demand for greater power efficiency in computing is on the rise from desktop to laptop PCs. With an Intel Core Duo processor, you get a balance of great dual-core computing capabilities and power savings. Its enhanced voltage efficiency supports cooler and quieter system designs as compared to traditional desktop and laptop PCs. And thanks to the innovative energy efficient technologies built-in, the Intel® Core™ Duo processor is able to transfer power only to those areas of the processor that need it, thereby enabling laptops to save power and desktops to have thinner, sleeker designs. Many people are confused what exactly the difference between Intel Core 2 Duo and Between Intel Pentium D or Intel Dual Core processors….

The Simple facts are,

Intel Core 2 Duo processors are next gen processors from Intel on 65 nm platform… developed from Ground up with new Architecture called Core… so they are whole new Processors just Jump like Pentium 2 to Pentium 3 or Pentium 4… Expect one Core 2 Duo Lowest End Processors like E4400/E4300 taking up and beating Intel Pentium D 3.8 GHz ones with ease … runs damn cool and super over clocker…