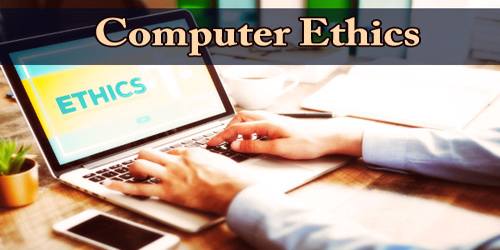 Ethics are the moral values that stop us from doing anything that is not legal and that does not harm or damage anyone else’s work, or interests. Ethics are something that are embittered in us from childhood. Ethics are unlike laws that legally mandate what is right or wrong.  Ethics illustrates society’s views about what is right and what is wrong.

Computer Ethics are a set of moral standards that govern the use of computers, and it is a part of practical philosophy concerned with how computing professionals should make decisions regarding professional and social conduct. Margaret Anne Pierce, a professor in the Department of Mathematics and Computers at Georgia Southern University has categorized the ethical decisions related to computer technology and usage into three primary influences:

Computer ethics essentially protect individuals online from predation: they prevent the breach of privacy, identify theft, interference with work, and unlawful use of proprietary software, among other events. Computer ethics govern the behavior of users online and date back to 1992. These ethics govern the social, financial, and legal uses of computers worldwide.

The code of computer ethics also called the Ten Commandments, instructs users to not harass other users, use computers to spy or use computers to gain access to private information. Ethics prevent the taking of intellectual information without compensation and prevent users from using computing resources without compensation or authorization. The ethics also mandate the use of machines in a manner considerate and respectful of others.

The term computer ethics was first coined by Walter Maner, a professor at Bowling Green State University. Maner noticed ethical concerns that were brought up during his Medical Ethics course at Old Dominion University became more complex and difficult when the use of technology and computers became involved. The conceptual foundations of computer ethics are investigated by information ethics, a branch of philosophical ethics promoted, among others, by Luciano Floridi.

Computer Ethics is the branch of philosophy that analysis the nature and social impact of computer technology as well as the standards of conduct that pertain to the proper use of computers. It involves social issues, such as access rights, working place monitoring, censorship, and junk mail; professional issues such as professional responsibility and code of conduct; legal issues such as legal obligations, data protection, computer misuse, and software piracy.

Within a relatively short period of time, computer technology has created huge new possibilities and also the ethical and social implications on both business and individual’s life. However, ethical framework and laws lag behind all the new innovations, to fill the vacuum, it needs timely effort to make laws, to corporate with company policy, personal policy, and social conventions. Computer ethics is at its relatively young stages.

The concept of computer ethics originated in the 1940s with MIT professor Norbert Wiener, the American mathematician, and philosopher. While working on anti-aircraft artillery during World War II, Wiener and his fellow engineers developed a system of communication between the part of a cannon that tracked a warplane, the part that performed calculations to estimate a trajectory, and the part responsible for the firing. Wiener termed the science of such information feedback systems, “cybernetics,” and he discussed this new field with its related ethical concerns in his 1948 book, Cybernetics. In 1950, Wiener’s second book, “The Human Use of Human Beings”, delved deeper into the ethical issues surrounding information technology and laid out the basic foundations of computer ethics.

A bit later during the same year, the world’s first computer crime was committed. A programmer was able to use a bit of computer code to stop his banking account from being flagged as overdrawn. However, there were no laws in place at that time to stop him, and as a result, he was not charged. To make sure another person did not follow suit, an ethics code for computers was needed.

In the 1960s, Donn Parker, an author on computer crimes, pointed by ACM, led the creation of ethics code in computer technology fields. In 1966, MIT’s Joseph Weizenbaum writes a program called ELIZA that makes the computer act as a psychotherapist. In 1966 First computer crime, a programmer used computer code to prevent his banking account from being flagged as overdrawn. When late discovered, there was no law to charge this crime. In 1966 the adoption of Freedom of Information Act, which gave the individual and organizations the right to access data held by the federal government

The 1970s-1980s The young and exponential growth of computer technology, which features minicomputer, microcomputer, personal computer, and the beginning of networking. The attention turned to software and the issues are surrounding it, such as property rights, software piracy, liability, privacy, computer crime, hackers and more.

In 1973, the Association for Computing Machinery (ACM) adopted its first code of ethics. SRI International’s Donn Parker, an author on computer crimes, led the committee that developed the code.

In 1976, medical teacher and researcher Walter Maner noticed that ethical decisions are much harder to make when computers are added. He noticed a need for a different branch of ethics for when it came to dealing with computers. The term “computer ethics” was thus invented.

In 1976 Joseph Weizenbaum made his second significant addition to the field of computer ethics. He published a book titled Computer Power and Human Reason, which talked about how artificial intelligence is good for the world; however, it should never be allowed to make the most important decisions as it does not have human qualities such as wisdom. By far the most important point he makes in the book is the distinction between choosing and deciding. He argued that deciding is a computational activity while making choices is not and thus the ability to make choices is what makes us humans.

At a later time during the same year Abbe Mowshowitz, a professor of Computer Science at the City College of New York, published an article titled “On approaches to the study of social issues in computing.” This article identified and analyzed technical and non-technical biases in research on social issues present in computing.

In 1978 the adoption of the Right to Federal Privacy Act, which limited the government’s ability to search bank records. In 1979, Terrell Ward Bynum developed a curriculum for a university courses on computer ethics. He late launched an essay competition to generate interest in computer ethics. In 1984 The adoption of the Small Business Computer Security and Education Act, which advises Congress on matters relating to computer crime against small businesses.

In 1985, he published the widest-selling issue in the journal’s history “Entitled Computers and Ethics”. In 1985 James Moor classic essay, “What is Computer Ethics?” were published, in his view, computer ethics includes: (1) identification of computer-generated policy vacuums, (2) clarification of conceptual muddles, (3) formulation of policies for the use of computer technology and (4) ethical justification of such policies. (Terrell Ward Bynum)

In 1988, Robert Hauptman, a librarian at St. Cloud University, came up with “information ethics”, a term that was used to describe the storage, production, access, and dissemination of information. Near the same time, the Computer Matching and Privacy Act were adopted and this act restricted United States government programs identifying debtors.

In the year 1992, ACM adopted a new set of ethical rules called “ACM Code of Ethics and Professional Conduct” which consisted of 24 statements of personal responsibility.

Three years later, in 1995, Krystyna Górniak-Kocikowska, a Professor of Philosophy at Southern Connecticut State University, Coordinator of the Religious Studies Program, as well as a Senior Research Associate in the Research Center on Computing and Society, came up with the idea that computer ethics will eventually become a global ethical system and soon after, computer ethics would replace ethics altogether as it would become the standard ethics of the information age.

In 1999, Deborah Johnson, opposite of Gorniak’s view, assumes computer ethical theories will not lead to a revolution in ethics, but only servers as the bedrock foundation of ethical thinking and analysis. Computer ethics is only the same old ethics questions with a new twist.

Post 20th century, as a result to much debate of ethical guidelines, many organizations such as ABET offer ethical accreditation to University or College applications such as “Applied and Natural Science, Computing, Engineering, and Engineering Technology at the associate, bachelor, and master levels” to try and promote quality works that follow sound ethical and moral guidelines.

In 2018 The Guardian and The New York Times reported that Facebook took data from 87 million Facebook users to sell to Cambridge Analytica. In 2019 Facebook started a fund to build an ethics center at the Technical University of Munich, located in Germany. This was the first time that Facebook-funded an academic institute for matters regarding computer ethics.

Privacy concerns, intellectual property rights, and effects on society are some of the common issues of computer ethics.

Jobs – Some jobs have been abolished while some jobs have become simpler as computers have taken over companies and businesses. Things can now be done in just one click whereas before it takes multiple steps to perform a task. This change may be considered unethical as it limits the skills of the employees.

There are also ethical concerns on the health and safety of employees getting sick from constant sitting, staring at computer screens and typing on the keyboard, or clicking on the mouse.

Environmental Impact – The environment has been affected by computers and the internet since so much time spent using computers increases energy usage which in turn increases the emission of greenhouse gases.

There are ways where we can save energy like limiting computer time and turning off the computer or putting on sleep mode when not in use. Buying energy-efficient computers with Energy Star labels can also help save the environment.

Social Impact – Computers and the internet help people stay in touch with family and friends. Social media has been very popular nowadays.

Computer gaming influenced society both positively and negatively. Positive effects are improved hand-eye coordination, stress relief, and improved strategic thinking. Negative effects are an addiction of gamers, isolation from the real world, and exposure to violence.

Computer technology helps the government in improving services to its citizens. An advanced database can hold huge data being collected and analyzed by the government.

Computer ethics are something that cannot be imposed on us, it is rather something that should be followed out of our own will and desire. The way we use the computer to access information speaks a lot about us and our ethical values.

Identifying ethical issues as they arise, as well as defining how to deal with them, has traditionally been problematic. In solving problems relating to ethical issues, Michael Davis proposed a unique problem-solving method. In Davis’s model, the ethical problem is stated, facts are checked, and a list of options is generated by considering relevant factors relating to the problem. The actual action taken is influenced by specific ethical standards.