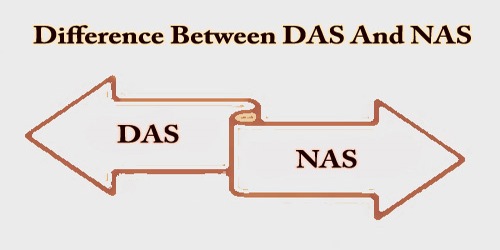 Difference Between DAS And NAS

DAS is well suited for a small-to-medium-sized business where sufficient amounts of storage can be configured at a low startup cost. The DAS enclosure will be a separate adjacent cabinet that contains the additional disk drives.

NAS (Network Attached Storage) comprehensively improve the inefficient storage way of DAS previously. It adopts a kind of file server that is specially developed for network data Storage and is independent of the PC server. All of the network data storage devices (such as a variety of disk arrays, tape, we, etc.) are concentrated within the NAS server, thus the storage capacity are often well extended. At the same time, due to this way of network storage is independently assumed by the NAS server, so basically there is no influence on the performance of the original network server. And therefore entire network performance is not affected.

This type of network requires a medium for attaching with several computers. File sharing protocols like NFS, AFP, or CIFS provide access to files in a network.

The key difference between DAS and NAS –

For the environment that has over one server or PC, DAS equipment may cost lower of the initial fee, but during this connection mode, each PC or server has its own storage disk alone, which causes it difficult for the redistribution of capacity. For the storage system management of the full environment, there’s no centralized management solution, making the management work tedious and repetitive. Therefore the overall cost of ownership (TCO) is comparatively high. Today DAS is largely replaced by NAS.