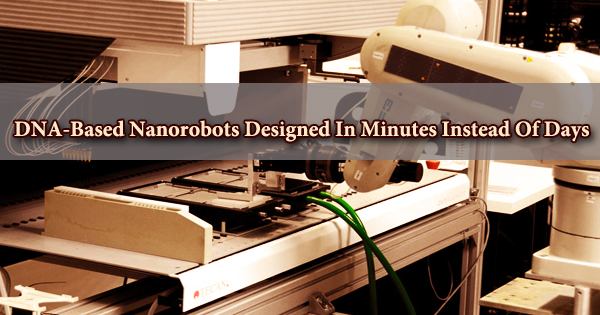 DNA-Based Nanorobots Created In Minutes Instead Of Days

Tiny DNA-based robots and other nanodevices, according to scientists, will one day carry medicine within our bodies, detect the existence of deadly pathogens, and assist in the manufacture of ever-smaller electronics. The future of drug and medicine distribution, as well as the detection of dangerous pathogens within our bodies, is inextricably linked to the development of nanomachines. The nanomachine revolution has advanced to the point that scientists can now use DNA to produce nanodevices that can be used in a variety of fields, including nanomanufacturing, synthetic biology, biosensing, and biophysics.

Researchers have made a significant move toward that future by creating a new method that can design even more complex DNA robots and nanodevices in a fraction of the time it took before. In the paper entitled “Integrated computer-aided engineering and design for DNA assemblies” and published in the Nature Materials journal (April 19, 2021), researchers created a new method that allows them to build these complex DNA robots and nanodevices in minutes rather than days.

MagicDNA is a new program developed by researchers at The Ohio State University, led by former engineering doctoral student Chao-Min Huang. Researchers may use the software to design ways to incorporate tiny strands of DNA into complex structures with moving parts like rotors and hinges that can perform a range of tasks, including drug delivery. MagicDNA requires the installation of MATLAB, a proprietary multi-paradigm programming language, as well as a numeric computing environment.

“There is getting to be more and more commercial interest in DNA nanotechnology,” says Carlos Castro a professor of mechanical and aerospace engineering at Ohio State, and one of the study’s co-authors.

According to Carlos Castro, co-author of the study and associate professor of mechanical and aerospace engineering at Ohio State, “researchers have been doing this for a number of years with slower methods and repetitive manual measures.”

“But now, nanodevices that may have taken us several days to design before now take us just a few minutes,” Castro said.

Researchers can now create nanodevices that are much more complex and useful. These researchers claimed that using MagicDNA, they could make devices with as few as six individual components, link them with hinges and joints, and perform complex motions. It will also be simpler to create flexible and scalable robots or devices with more than 20 components using the software. This breakthrough, they say, is a huge step toward being able to build nanodevices that can perform more complex tasks under our control.

The MagicDNA program developed by the team allows researchers to combine DNA strands into complex structures. It combines coarse-grained molecular dynamics-based computer-aided engineering with a scalable computer-aided design approach that combines top-down automation with a bottom-up emphasis on geometry control.

“Previously, we could build devices with up to about six individual components and connect them with joints and hinges and try to make them execute complex motions,” said study co-author Hai-Jun Su, professor of mechanical and aerospace engineering at Ohio State.

“With this software, it is not hard to make robots or other devices with upwards of 20 components that are much easier to control. It is a huge step in our ability to design nanodevices that can perform the complex actions that we want them to do.”

MagicDNA has a number of advantages that will help scientists design stronger and more useful nanodevices, with researchers hoping to shorten the time it takes for it to be used in our daily lives. Another distinct advantage of MagicDNA is that it allows researchers to complete designs in 3-D. Previous tools only enabled researchers to create in 2-D, forcing them to map out their designs in 3-D. As a result, the researchers were unable to create devices that were too complicated.

Scientists may also use the MagicDNA method to simulate how their DNA-based nanomachines would function in the real world. This is a huge benefit when working with increasingly complex devices.

“As you make these structures more complex, it is difficult to predict exactly what they are going to look like and how they are going to behave,” Castro adds. “It is critical to be able to simulate how our devices will actually operate. Otherwise, we waste a lot of time.”

The program offers a number of benefits that will aid scientists in designing stronger, more useful nanodevices, and researchers expect to reduce the time it takes for them to enter daily use. One advantage is that it enables researchers to complete the entire design process in true 3D. Previously, only 2D modeling tools were available, requiring researchers to map their creations into 3D. As a result, designers couldn’t create devices that were too complicated.

MagicDNA can also assist in the “top down” or “bottom up” design of DNA structures, according to Nano Werk. Researchers will get individual DNA strands and shape them into the structures they want in a “bottom up” creation, giving them complete control over the local system structure and properties. In the “top down” method, researchers can choose how their system will be geometrically shaped and how the DNA strands will be combined automatically.

MagicDNA also allows researchers to model how DNA devices can act and travel in order to complete their tasks. Because of the devices’ complex nature, it would be difficult to predict what they would do or look like in the real world. As a result, the researchers emphasize the importance of simulating how the devices will act or function. Co-author Anjelica Kucinic, a doctoral student in chemical and biomolecular engineering at Ohio State, led the researchers in creating and characterizing several nanostructures designed by the program as a demonstration of its capabilities.

Robot arms with claws that can pick up smaller objects, as well as a hundred nanometer-sized structure that resembles an airplane, were among the devices they created (The “airplane” is 1000 times smaller than the width of a human hair). These nanodevice-making abilities demonstrate that they can make more useful items and perform multiple tasks with a single computer, according to the researchers. Because of their size, these nanomachines may perform a variety of tasks. That means a DNA robot delivering a drug could also scan the body for harmful pathogens and respond by releasing additional doses if they are found.

It’s one thing to have a DNA robot that can identify a specific pathogen after being injected into the bloodstream.

“But a more complex device may not only detect that something bad is happening but can also react by releasing a drug or capturing the pathogen,” Castro said.

“We want to be able to design robots that respond in a particular way to a stimulus or move in a certain way.”

MagicDNA will be used in universities and research laboratories in the coming years, according to researchers, with its use expanding in the near future, including practical commercial applications for DNA nanodevices.