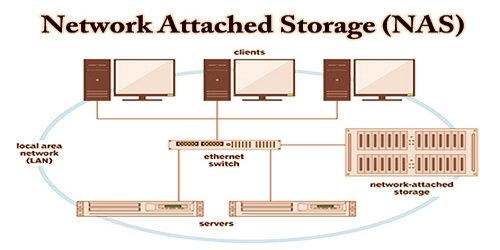 Network-attached storage (NAS) may be a computer data storage server that is dedicated to nothing more than file sharing. Network-attached storage does not provide any of the activities that a server in a server-centric system typically provides, such as email, authentication, or file management. It is often manufactured as a computer appliance a purpose-built specialized computer.

From the mid-1990s, NAS devices began gaining popularity as a convenient method of sharing files among multiple computers. Potential benefits of dedicated network-attached storage, compared to general-purpose servers also serving files, include faster data access, easier administration, and simple configuration. The hard disk drives with “NAS” in their name are functionally similar to other drives but may have different firmware, vibration tolerance, or power dissipation to make them more suitable for use in RAID arrays, which are often used in NAS implementations.

NAS allows more hard disk storage space to be added to a network that already utilizes servers without shutting them down for maintenance and upgrades. With a NAS device, storage is not an integral part of the server. Instead, in this storage-centric design, the server still handles all of the processing of data but a NAS device delivers the data to the user.

With our ever-growing reliance on computers, laptops, smartphones, tablets and the like comes an abundance of data files that need to be stored. Word processing documents, emails, photos, databases- the list goes on and on. At home, it is easy to end up with files scattered all over the place- some on our computer drive, others on a flash drive, photos on an SD card, etc. It can be easy to lose files and frustrating to find information when we aren’t sure where it is stored.

Likewise, businesses have their own data storage issues to contend with. Data growth can lead to storage space issues, leading many businesses to invest large amounts of money in technology to store their data. These issues can be resolved through the use of Network-attached storage (NAS). Such a “NAS” SATA hard disk drive can be used as an internal PC hard drive, without any problems or adjustments needed, as it simply supports additional options and may possibly be built to a higher quality standard than a regular consumer drive.

NAS is useful for more than just general centralized storage provided to client computers in environments with large amounts of data. NAS can enable simpler and lower cost systems such as load-balancing and fault-tolerant email and web server systems by providing storage services. The price of NAS appliances has fallen sharply in recent years, offering flexible network-based storage to the home consumer market for little more than the cost of a regular USB or FireWire external hard disk. Many of these home consumer devices are built around ARM, PowerPC or MIPS processors running an embedded Linux operating system.

A NAS device doesn’t must be located within the server but can exist anywhere in a LAN and might be made up of multiple networked NAS devices. A NAS offers an ideal solution to share the content in between multiple systems, so multiple clients can access data from a NAS source at a time. NAS units usually don’t have a keyboard or display and are controlled and configured over the network, often using a browser. Their functioning doesn’t need a totally featured operating system and will work on a stripped-down OS. Home users are also showing interest in investing on NAS appliances as they will store media files, photos, and other memorabilia without the need of any kind of complex managing tasks.