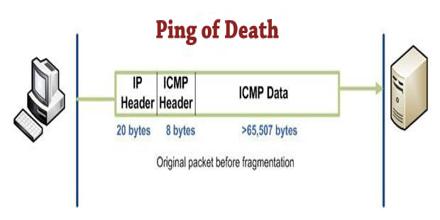 This article describe about Ping of Death, which is a type of network attack in which an attacker sends a network packet that is larger than what the target computer can handle. It is a method of using the ping command to freeze or reboot the computer by sending a packet greater than 65536 bytes. It is used to make a computer system unstable by deliberately sending larger ping packets to the target system over an IPv4 network. Like other large but well-formed packets, a ping of death is fragmented into groups of 8 octets before transmission.