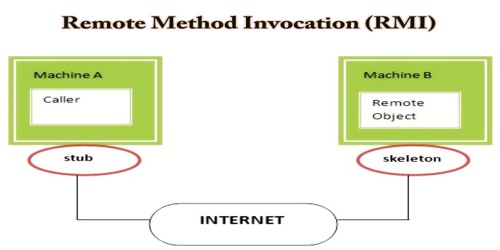 In computing, Remote Method Invocation (RMI) is an API that provides a mechanism to create distributed applications in java. The RMI allows an object to invoke methods on an object running in another JVM. It is a way that a programmer, using the Java programming language and development environment, can write object-oriented programming in which objects on different computers can interact in a distributed network.

Through RMI, object running in a JVM present on a computer (Client-side) can invoke methods on an object present in another JVM (Server-side). RMI creates a public remote server object that enables the client and server-side communications through simple method calls on the server object.

The original implementation depends on Java Virtual Machine (JVM) class-representation mechanisms and it thus only supports making calls from one JVM to another. The protocol underlying this Java-only implementation is known as Java Remote Method Protocol (JRMP). In order to support code running in a non-JVM context, programmers later developed a CORBA version. Usage of the term RMI may denote solely the programming interface or may signify both the API and JRMP, IIOP, or another implementation, whereas the term RMI-IIOP (read: RMI over IIOP) specifically denotes the RMI interface delegating most of the functionality to the supporting CORBA implementation.

The RMI (Remote Method Invocation) provides remote communication between the applications using two objects stub and skeleton. The basic idea of Java RMI, the distributed garbage-collection (DGC) protocol, and much of the architecture underlying the original Sun implementation, come from the “network objects” feature of Modula-3. RMI is the Java version of what is generally known as a remote procedure call (RPC), but with the ability to pass one or more objects along with the request. The object can include information that will change the service that is performed in the remote computer. Sun Microsystems, the inventors of Java, calls this “moving behavior.”

For example, when a user at a remote computer fills out an expense account, the Java program interacting with the user could communicate, using RMI, with a Java program in another computer that always had the latest policy about expense reporting. In reply, that program would send back an object and associated method information that would enable the remote computer program to screen the user’s expense account data in a way that was consistent with the latest policy. The user and the company both would save time by catching mistakes early. Whenever the company policy changed, it would require a change to a program in only one computer.

The programmers of the original RMI API generalized the code somewhat to support different implementations, such as a HTTP transport. Additionally, the ability to pass arguments “by value” was added to CORBA in order to be compatible with the RMI interface. Still, the RMI-IIOP and JRMP implementations do not have fully identical interfaces.

Remote Method Invocation (RMI) functionality comes in the package java.rmi, while most of Sun’s implementation is located in the sun.rmi package. Note that with Java versions before Java 5.0 developers had to compile RMI stubs in a separate compilation step using rmic. Version 5.0 of Java and beyond no longer require this step.