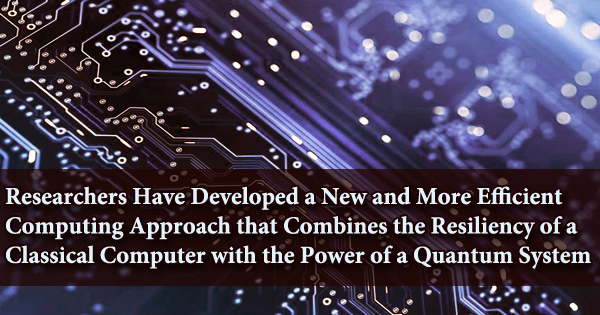 Researchers have developed a new and more efficient computing approach that combines the resiliency of a classical computer with the power of a quantum system. This novel computing approach opens the door to a variety of algorithms and experiments, bringing quantum researchers closer to practical applications and discoveries.

“In the future, quantum computers could be used in a wide variety of applications including helping to remove carbon dioxide from the atmosphere, developing artificial limbs, and designing more efficient pharmaceuticals,” according to Christine Muschik, a principal investigator at the Institute for Quantum Computing (IQC) and a University of Waterloo faculty member in physics and astronomy.

Quantum computers will eventually be able to solve problems requiring a large number of variables and possible outcomes, such as modeling medication interactions or optimizing supply chain operations, considerably quicker than traditional computers. Qubits are the fundamental unit of quantum computing, and their value can be 1, 0, or 1 and 0 at the same time, overlapping (superposition) and interweaving (entanglement) according to physical rules. Qubits, as opposed to bits, can hold several values at the same time and do computations that a traditional computer cannot.

IQC’s research team, in collaboration with the University of Innsbruck, was the first to propose a measurement-based method in a feedback loop with a conventional computer, paving the door for a new way to address difficult computing issues. Because their technique is resource-efficient, tiny quantum states may be used because it is custom-tailored to certain sorts of challenges.

Hybrid computing, which combines the processor of a normal computer with a quantum co-processor in a feedback loop, provides researchers with a more robust and flexible method than using a quantum computer alone. While scientists are presently working on hybrid computers based on quantum gates, Muschik’s team was more interested in quantum calculations that might be performed without them.

They devised a method for executing a hybrid quantum-classical computing by taking a series of measurements on an entangled quantum state. Because it gives a new way of thinking about optimization algorithms, the team’s theoretical study is good news for quantum software developers and experimentalists.

The method works for a wide range of quantum systems, including photonic quantum co-processors, and has a high error tolerance, which is a common concern in quantum systems. Hybrid computing is a new frontier in quantum applications in the near future.

Muschik and her colleagues think that by removing the need on quantum gates, they will be able to create feedback loops that can be customized to the datasets that the computers are investigating in a more effective manner, eliminating the struggle with finicky and sensitive resources.

“Quantum computers have the potential to solve problems that supercomputers can’t, but they are still experimental and fragile,” said Muschik. This project is funded by CIFAR.

Quantum machines are currently rudimentary systems similar to a calculator at the turn of the century, but their processing capability for certain particular tasks is far larger than that of a regular computer.