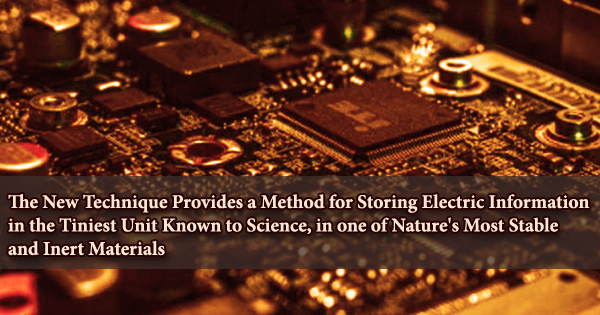 The New Technique Provides a Method for Storing Electric Information in the Tiniest Unit Known to Science, in one of Nature’s Most Stable and Inert Materials

Tel Aviv University researchers have developed the world’s smallest technology, which has a thickness of only two atoms. The new technique, according to the researchers, provides a method for storing electric information in the tiniest unit known to science, in one of nature’s most stable and inert materials. The quantum-mechanical electron tunneling permitted through the atomically thin layer might greatly improve the information reading process.

“Our research stems from a curiosity about the behavior of atoms and electrons in solid materials, which has generated many of the technologies supporting our modern way of life,” says Dr. Ben Shalom. “We (and many other scientists) are attempting to comprehend, anticipate, and even manipulate the intriguing characteristics of these particles when they condense into an organized structure known as a crystal. A small crystalline device, for example, sits at the core of the computer, designed to flip between two states signaling distinct answers such as “yes” or “no,” “up” or “down,” and so on.”

It is impossible to encode and interpret information without this dichotomy. The practical problem is to develop a switching mechanism that can be implemented in a compact, quick, and low-cost device.

Current state-of-the-art electronics are made up of small crystals containing just approximately a million atoms (about a hundred atoms in height, breadth, and thickness), allowing a million of these devices to be crammed into the space of a single coin and switch at a million times per second.

For the first time, the researchers were able to reduce the thickness of crystalline devices to only two atoms after the technical achievement. Dr. Ben Shalom highlights that such a tiny structure allows memories to be created based on electrons’ quantum capacity to hop rapidly and effectively across barriers as thin as a few atoms. As a result, it has the potential to dramatically enhance the speed, density, and energy consumption of electronic equipment.

The researchers employed a two-dimensional substance that consisted of one-atom-thick layers of boron and nitrogen organized in a hexagonal pattern. They were able to violate the symmetry of this crystal in their experiment by intentionally constructing two such layers. “In its natural three-dimensional state, this material is made up of a large number of layers placed on top of each other, with each layer rotated 180 degrees relative to its neighbors (antiparallel configuration)” says Dr. Ben Shalom.

“In the lab, we were able to artificially stack the layers in a parallel configuration with no rotation, which hypothetically places atoms of the same kind in perfect overlap despite the strong repulsive force between them (resulting from their identical charges). In reality, the crystal likes to move one layer slightly in relation to the other, such that only half of the atoms in each layer are in perfect overlap, and those that do overlap are of opposing charges, while the rest are situated above or below an empty space in the hexagon’s center. The layers in this artificial stacking structure are very unique from one another. For example, if in the top layer only the boron atoms overlap, in the bottom layer it’s the other way around.”

Dr. Ben Shalom also highlights the work of the theory team, who conducted numerous computer simulations; “Together we established a deep understanding of why the system’s electrons arrange themselves just as we had measured in the lab. Thanks to this fundamental understanding, we expect fascinating responses in other symmetry-broken layered systems as well,” he says.

Maayan Wizner Stern, the Ph.D. student who led the study, explains: “The symmetry breaking we achieved in the lab, which does not occur in nature, drives the electric charge to rearrange itself between the layers, resulting in a small internal electrical polarization perpendicular to the layer plane. When we apply an external electric field in the opposite direction the system slides laterally to switch the polarization orientation. Even when the external field is turned off, the switched polarization stays stable. Thick three-dimensional ferroelectric systems, which are commonly utilized in technology today, are comparable to this system.”

“The ability to force a crystalline and electronic arrangement in such a thin system, with unique polarization and inversion properties resulting from the weak Van der Waals forces between the layers, is not limited to the boron and nitrogen crystal,” adds Dr. Ben Shalom. “Many layered crystals with the correct symmetry characteristics should exhibit the same behavior. Slide-Tronics is the term we gave to the notion of interlayer sliding as an innovative and efficient approach to operate sophisticated electrical equipment.”

Maayan Vizner Stern concludes: “We’re interested in seeing what happens in different states that we impose on nature, and we believe that alternative structures with many degrees of freedom are feasible. Miniaturization and sliding to flip information will, we believe, enhance today’s electronic gadgets while also allowing for new methods to control information in future devices. We expect this technology to contribute to detectors, energy storage and conversion, light interaction, and other areas in addition to computer gadgets. As far as we can tell, our task is to find additional crystals with new and sluggish degrees of freedom.”

The European Research Council (ERC beginning grant), the Israel Science Foundation (ISF), and the Ministry of Science and Technology (MOST) all contributed to the study’s success.