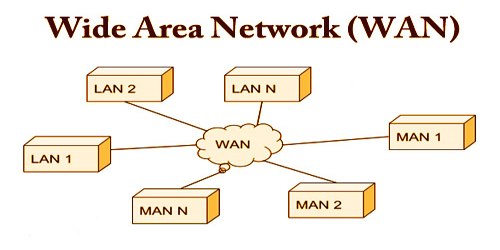 A computer network is generally defined as the connection of two or more physical devices in a geographical area. A network permits a group of computers to get interlinked in order to communicate. There are various types of computer networks which are LAN, MAN, and WAN.

A wide area network (WAN) is a large network of information that is not tied to a single location. It is a network that exists over a large-scale geographical area. A WAN connects different smaller networks, including local area networks (LANs) and metro area networks (MANs).

Business, similarly as education and government entities use wide area networks to relay data to staff, students, clients, buyers, and suppliers from various locations across the world. In essence, this mode of telecommunication allows a business to effectively perform its daily function irrespective of location. The net could also be considered a WAN.

WANs are the biggest and most expansive forms of computer networks available to date. These networks are often established by service providers that then lease their WAN to businesses, schools, governments, or the general public. These customers can use the network to relay and store data or communicate with other users, irrespective of their location, as long as they need access to the established WAN. Access are often granted via different links, like virtual private networks (VPNs) or lines, wireless networks, cellular networks, or internet access.

A WAN connects more than one LAN and is used for larger geographical areas. WANs are similar to a banking system, where hundreds of branches in different cities are connected with each other in order to share their official data. For international organizations, WANs allow them to carry out their essential daily functions without delay. Employees from anywhere can use a business’s WAN to share data, communicate with coworkers, or simply stay connected to the greater data resource center for that organization.

Protocols including Packet over SONET/SDH, Multiprotocol Label Switching (MPLS), Asynchronous Transfer Mode (ATM) and Frame Relay are often used by service providers to deliver the links that are used in WANs. X.25 was an important early WAN protocol, and is often considered to be the “grandfather” of Frame Relay as many of the underlying protocols and functions of X.25 are still in use today (with upgrades) by Frame Relay. Academic research into wide area networks can be broken down into three areas: mathematical models, network emulation, and network simulation.

There are many various sorts of area networks, but one in every of the foremost common networks outside of WANs is that the local area network, or LAN. Whereas WANs can exist globally, without ties to a physical location through the utilization of a leased network provider, LANs exist within a limited area. LANs may be accustomed to access a greater WAN (such as the internet), but only within the area where the LAN’s infrastructure can reach.

Many technologies are available for wide area network links. Examples include circuit-switched telephone lines, radio emission transmission, and optical fiber. New developments in technologies have successively increased transmission rates. However, WANs also provide a vital service to the public. Students at universities might depend upon WANs to access library databases or university research. And each day, people depend upon WANs to communicate, bank, shop, and more.