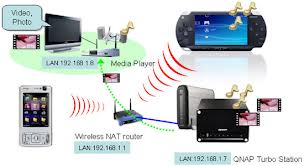 It is a wireless transmission medium that is used to communicate information through radio signals in air, over long distance such as between cities and countries. In this medium, a transmitter is required to send messages (signals) and receiver is required to receive them. To receive the broadcast radio signal, the receiver has an antenna that is located in the range of signal. Some networks use a special device called transceiver used to send and to receive messages in the form of radio signals.

The frequencies falling between 3000 hertz (3 kHz) and 300,000,000,000 hertz (300 GHz) are called RADIO FREQUENCIES (abbreviated RF) since they are commonly used in radio communications. This part of the radio frequency spectrum is divided into bands, each band being 10 times higher in frequency than the one immediately below it. This arrangement serves as a convenient way to remember the range of each band. The RF bands are shown in table 2.5- The usable radio-frequency range is roughly 10 kilohertz to 100 gigahertz.

There are two types of microwaves:

Terrestrial – Used to link networks over long distances but the two microwave towers must have a line of sight between them. The frequency is usually 4-6GHz or 21-23GHz. Speed is often 1-10Mbps. The signal is normally encrypted for privacy. Two nodes may exist.

Satellite – A satellite orbits at 22,300 miles above the earth which is an altitude that will cause it to stay in a fixed position relative to the rotation of the earth. This is called a geosynchronous orbit. A station on the ground will send and receive signals from the satellite. The signal can have propagation delays between 0.5 to 5 seconds due to the distances involved. The transmission frequency is normally 11-14GHz with a transmission speed in the range of 1-10Mbps.

Infrared light is part of electromagnetic spectrum that is shorter than radio waves but longer than visible light. Its frequency range is between 300 GHz and 400 GHz that corresponds to wavelength from 1mm to 750 nm. Infrared has long been used in night vision equipment and TV remote control. Infrared is also one of the physical media in the original wireless LAN standard, that’s IEEE 802.11. Infrared use in communication and networking was defined by the IrDA (Infrared Data Association). Using IrDA specifications, infrared can be used in a wide range of applications, e.g. file transfer, synchronization, dial-up networking, and payment. However, IrDA is limited in range (up to about 1 meter). It also requires the communicating devices to be in LOS and within its 30-degree beam-cone. Light may interfere with the signal.