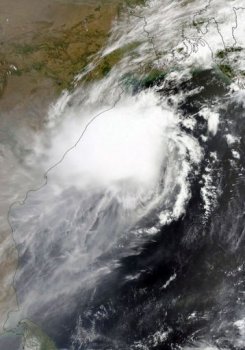 Weather officials in Bangladesh said that Mahasen was likely to whip the heavily populated coastline stretching from Bangladesh’s second city Chittagong to the Cox’s Bazaar tourist region in the afternoon.But fears of widespread damage receded as Mahasen appeared to have lost some of its power after languishing over the Bay of Bengal for several days, and made landfall packing winds of up to 90 kilometres (56 miles) per hour.”Cyclone Mahasen started crossing the Patuakhali coast at 9:00 am (0830 IST) Thursday,” Shamsuddun Ahmed, deputy director of the Bangladesh Meteorological Department, told AFP.

“It is not a severe cyclone. It did not gain strength in the last part of its journey as it hit the coast,” said Ahmed.”Its center is still in the Bay of Bengal and will hit the Chittagong coast in the afternoon.”

Provincial administrator Nurul Amin told AFP one man had drowned in a lake in a coastal district as heavy rains battered the region while low-lying areas were submerged by a one-metre (three-foot) storm surge.About 800,000 people spent the night in more than 2,000 cyclone shelters as well as schools and colleges along Bangladesh’s long coastline.

Of the total, 600,000 people alone were evacuated in the Chittagong region, provincial administrator Mohammad Abdullah told AFP.”We have enough food, medicine and other facilities in these shelters,” he said, adding that the armed forces are on standby to help if needed.

Mohammad Mehrajuddin, an elected local government head of southern Nijhum Dwip Island, told AFP by phone that many villagers in his area did not move to cyclone shelters for fear that their cattle would be stolen in the night.

There was a similar reluctance to move among the Muslim Rohingya across the border in Myanmar’s Rakhine state, reflecting a deep mistrust of the security forces and local Buddhists after two outbreaks of communal bloodshed last year.

State media in Myanmar said that by Wednesday 70,000 people had been evacuated from the camps and vulnerable local villages. About half of the residents at one camp for internally displaced persons (IDPs) on the outskirts of the Rakhine capital Sittwe appeared to have moved out overnight, according to AFP journalists who visited on Thursday morning. Than Win, 38, was among those staying behind to guard his tent.

“Some of the IDPs do not trust the authorities,” he said. “They worry that they will be kept elsewhere and will never be able to come back,” he said, adding that the rest of his family had moved to higher ground. “What I’m worried about now is food.”

Buddhist-Muslim clashes in the region last year left about 200 people dead and whole neighbourhoods burned to the ground. Fifty-eight Rohingya were left missing after their boat capsized on Monday as they tried to escape the impending cyclone by sea to higher ground along the coast. Aid workers have expressed fears for the safety of the coastal dwellers.

“In many of the areas, sub-standard housing means people have little protection from the heavy wind and rain that comes with a cyclone,” said Jeff Wright, emergency operations director at World Vision.

“Often housing is destroyed or damaged severely in a storm like this, and livelihoods like crops can be flattened, impacting a family’s main source of income.” Rights groups have criticised Myanmar for failing to provide permanent housing sooner for displaced Rohingya, after months of warnings of the danger posed to the camps by this year’s monsoon. Bangladesh and Myanmar have both been frequent victims of cyclones which have left hundreds of thousands of people dead in recent decades.

“Cyclone Mahasen started crossing the Patuakhali coast at 9:00 am (0830 IST) Thursday,” Shamsuddun Ahmed, deputy director of the Bangladesh Meteorological Department, told AFP, adding, “it is not a severe cyclone”.

“The centre is still in the Bay of Bengal (and) will hit the Chittagong coast in the afternoon,” he said, as provincial administrators said one man had drowned in a coastal district after slipping in heavy rains. The country has raised its storm warning to seven, on a scale with a maximum of 10.The storm has already killed at least seven people and displaced 3,881 in Sri Lanka as it tracked across the Bay of Bengal towards Bangladesh. A boat carrying Rohingya Muslims in neighbouring Myanmar capsized at on Monday after hitting rocks off Pauktaw in Rakhine State while evacuating ahead of the storm. Official media reports said 42 people were rescued but 58 were missing. Mahasen weakened slightly overnight, but still remains a category one cyclone.

Cyclone shelters on Bay of Bengal:

About 800,000 people spent the night in more than 2,000 cyclone shelters and schools and colleges in Bangladesh’s long coastline after the weather office had warned that the storm could hit early Thursday morning, officials said.

Of the total, 600,000 people alone were evacuated in the Chittagong region, which was expected to bear the brunt of the cyclone, provincial administrator Mohammad Abdullah told AFP.

“We have enough food, medicine and other facilities in these shelters,” he said, adding that the armed forces have been kept on stand-by to face any situation.