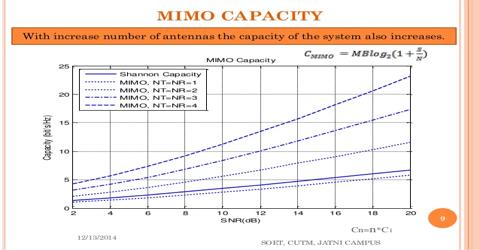 Assignment on Capacity of Mimo

Capacity studies in communication started with Claude Shannon pioneered theorems. He defined capacity as the maximum mutual information between inputs and outputs of a communication channel. He then defined his coding theorem, which states that a code does exist that could achieve a data rate close to the capacity with a negligible probability of error. Shannon studies were related to the AWGN channel, wire lined channels. These channels do not fade the signals. Considering the wireless transmission, it is expected that the maximum supportable capacity is smaller than that of the wire lined channels. This is due to the multi-path and fading effects of the wireless communication channels. Capacity studies initially are done for flat fading channels.

The capacity of AWGN channel given the Bandwidth B and SNR g is given by the well known formula.

Shannon capacity can be considered as an upper limit for real systems. In wireless communication channel-fading information is important to be known at the transmitter or receiver side for better communication.

The relation between input and output is given by

Es is the average transmits signal energy. If we choose Ts=1 then Es turns out to be the transmit power.

Channel knowledge available only at receiver

The channel capacity in the absence of the channel knowledge at the transmitter is given by the following formula.

Inserting HHH=QDQH in the above equation, an equivalent and simple expression is obtained as in (13)

In the case of an normalized orthogonal channel satisfying Nr=Nt=N, the capacity of the MIMO channel is given as

That is the capacity of MIMO channel is equal to N times that of the SISO channel.

Channel knowledge available at the transmitter side case:

Figure 4.2: System model when channel knowledge is available at the transmitter side[6]

SVD of H yields H= UVH, inserting this into (11) and rearranging the parameters we get, Or this equation can be written as,

The capacity of the MIMO channel is the sum of the SISO channels,

The capacity maximization problem can be solved using the lagrangian methods, hence leading to the results

The optimal power allocation to the individual channels is found through an algorithm known as the Water pouring algorithm.

As can be seen from the formulas capacity of the MIMO channels increases when the channel knowledge is available at the transmitter, compared to the case in which receiver only has the channel information.

Capacity is the expected value of the capacity over the distribution of the channel elements. It can be though as the mean information rate.

Outage probability: is the probability that given a transmission rate R and transmit power constraint the channel capacity cannot support a reliable communication

Given an outage probability, the maximum information rate that can be supported by the communication channel is called the outage capacity of the channel.

Capacity when the channel is known only to the receiver is given as:

The capacity when the channel is known to the transmitter is given as:

A lower bound for the capacity is defined as [1],

MIMO channel capacity in the presence of antenna correlation effect [8]

When there is correlation between antennas at receiver or transmitter side, the channel matrix is expressed as,

Where Rr and Rt are positive definite matrices showing the correlation effect between antenna elements. The elements of the R matrices can be found using

If the channel is random then the capacity for the frequency selective MIMO channel is defines as in .

Channel capacity was established by Claude Shannon in 1940s, by using the mathematical theory of communication. The capacity of a channel is denoted by C. The channel capacity C is the maximum rate at which reliable communication can be performed, without any constraints on transmitter and receiver complexity. Shannon showed that for any rate R < C, there exist rate R channel codes with arbitrarily small block error probabilities.

Thus, for any rate R < C and any desired non-zero probability of error ρe,  there exists a rate R code that achieves ρe. The code may have a very long block length and encoding and decoding complexity may also be extremely large.  The required block length may increase as the desired  ρe  is decreased or the rate R is increased towards C. Shannon showed that code  operating at rates R > C cannot achieve an arbitrarily small error rate. So the error probability of a code operating at a rate above capacity is bounded away from zero. Therefore, the Shannon channel capacity is truly the fundamental limit to communication.

Where PK is the power assigned to the kth sub channel, λk is the kth value and σ2N is the noise power. For simplicity, it is assumed that σ2N = 1. According to Shannon, the maximum capacity of K parallel sub channels equals

Given the set of evalues { λk }, the power  PK allocated to each sub channel  k  is determined to maximize the capacity by using Gallager’s waterfilling theorem  such that

Each sub channel is filled up to a common level D, i.e.

With a constraint on the total Tx power such that

Where, PTX total transmitted power. This means that the sub cannel with the highest

Gain is allocated with the largest amount of power. In the case where 1/ λ, k >D then PK =0

When the uniform power allocation scheme is employed, the power PK is adjusted according to

Thus, in the situation where the channel is unknown, the uniform distribution of the power is applicable over the antennas. So that the power should be equally distributed between the N elements of the array at the Tx, i.e.,

The capacity of MIMO system is given as follows

By implementing the above equation using mat lab, following result is obtained

Figure 4.3shows, an analysis of the capacity of the system having multiple transmitters and receivers. The capacity of a MIMO system has been plotted against SNR in dB. It is clear that with increase in the number of antennas at the both sides capacity increases linearly i.e. with nt=4 and nr=4, we have achieved highest capacity in MIMO systems.