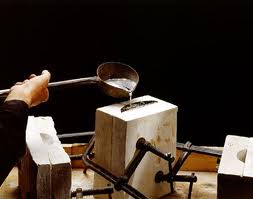 Casting in manufacturing
Casting is a process by which a fluid melt is introduced into a mold, allowed to cool in the shape of the form, and then ejected to make a fabricated part or casing. Four main elements are required in the process of casting: pattern, mold, cores, and the part. The pattern, the original template from which the mold is prepared, creates a corresponding cavity in the casting material. Cores are used to produce tunnels or holes in the finished mold, and the part is the final output of the process.
Substitution is always a factor in deciding whether other techniques should be used instead of casting. Alternatives include parts that can be stamped out on a punch press or deep-drawn, items that can be manufactured by extrusion or by cold-bending, and parts that can be made from highly active metals.
The casting process is subdivided into two distinct subgroups: expendable and nonexpendable mold casting.
Expendable mold casting
Expendable mold casting is a generic classification that includes sand, plastic, shell, and investment (lost-wax technique) moldings. All of these involve the use of temporary and nonreusable molds, and need gravity to help force molten fluid into casting cavities.In this process the mould is used only once.
Sand Casting
Sand casting requires a lead time of days for production at high output rates (1-20 pieces/hr-mold), and is unsurpassed for large-part production. Green (wet) sand has almost no part weight limit, whereas dry sand has a practical part mass limit of 2300-2700 kg. Minimum part weight ranges from 0.075-0.1 kg. Sand in most operations can be recycled many times and requires little additional input.
Preparation of the sand mold is fast and requires a pattern which can “stamp” out the casting template. Typically, sand casting is used for processing low-temperature steel and aluminium, magnesium, and nickel alloys. It is by far the oldest and best understood of all techniques. Consequently, automation may easily be adapted to the production process, somewhat less easily to the design and preparation of forms. These forms must satisfy exacting standards as they are the heart of the sand casting process – creating the most obvious necessity for human control.
Plaster casting (of metals)
Plaster casting is similar to sand molding except that plaster is substituted for sand. Plaster compound is actually composed of 70-80% gypsum and 20-30% strengthener and water. Generally, the form takes less than a week to prepare, after which a production rate of 1-10 units/hr-mold is achieved with a capability to pour items as massive as 45 kg and as small as 30 g with very high surface resolution and fine tolerances.
Once used and cracked away, normal plaster cannot easily be recast. Plaster casting is normally used for nonferrous metals such as aluminium-, zinc-, or copper-based alloys. It cannot be used to cast ferrous material because sulfur in gypsum slowly reacts with iron. Prior to mold preparation the pattern is sprayed with a thin film of parting compound to prevent the mold from sticking to the pattern. The unit is shaken so plaster fills the small cavities around the pattern. The form is removed after the plaster sets.
Plaster casting represents a step up in sophistication and required skill. The automatic functions easily are handed over to robots, yet the higher-precision pattern designs required demand even higher levels of direct human assistance.
Plaster casting (of plaster or concrete)
Plaster itself may be cast – either using single use waste molds, multiple use piece molds, or molds made of flexible material such as latex rubber (which is in turn supported by an exterior mold). The finished product is, unlike marble, relatively unattractive, lacking in transparency, and so is usually painted, often in ways that give the appearance of metal. Alternatively, the first layers cast may contain colored sand so as to give an appearance of stone. By casting concrete, rather than plaster, it is possible to create sculptures, fountains, or seating for outdoor use.
Shell molding
Shell molding is also similar to sand molding except that a mixture of sand and 3-6% resin holds the grains together. Set-up and production of shell mold patterns takes weeks, after which an output of 5-50 pieces/hr-mold is attainable. Aluminium and magnesium products average about 13.5 kg as a normal limit, but it is possible to cast items in the 45-90 kg range. Shell mold walling varies from 3-10 mm thick, depending on the forming time of the resin.

There are a dozen different stages in shell mold processing that include:
1. initially preparing a metal-matched plate
2. mixing resin and sand
3. heating pattern, usually to between 505-550 K
4. inverting the pattern (the sand is at one end of a box and the pattern at the other, and the box is inverted for a time determined by the desired thickness of the mill)
5. curing shell and baking it
6. removing investment
7. inserting cores
8. repeating for other half
9. assembling mold
10. pouring mold
11. removing casting
12. cleaning and trimming.
The sand-resin mix can be recycled by burning off the resin at high temperatures.
Investment Casting
Investment casting (lost-wax process) yields a finely detailed and accurate product, with excellent metallurgical properties.
Polystrene foam is also used in investment casting – see Lost-foam casting
After a variable lead time, usually weeks, 1-1000 pieces/hr-mold can be produced in the mass range 2.3-2.7 kg. Items up to 45 kg and as light as 30 g are possible for unit production.
The process starts by creating an injection die to the desired specifications. This die will be used to inject wax to create the patterns needed for investment casting. The patterns are attached to a central wax sprue, creating an assembly, or mold. The sprue contains the fill cup where the molten metal will be poured into the assembly.
The wax assembly is now dipped multiple times in a ceramic slurry, depending on the shell thickness desired. A layer of fine sand (usually Zircon) is added on top of each ceramic layer. This process will be repeated until the desired shell is created.
After the shell is created to the specifications desired, the wax must be removed,this is normally achieved using an autoclave. This is where the name “lost-wax process” comes from. This leaves an impression of the desired castings, which will be filled with metal. Before being cast, however, the shells must be heated up in a furnace so they don’t break during the casting process.
Next, the desired metal is poured into the hot ceramic shell. The metal fills each part on the assembly, and the central sprue cavity and fill cup. The individual parts will be removed after the mold cools and the shell is removed. The shell is generally removed with water-blasting, although alternate methods can be used. What remains is the casted metal parts, but they are still attached to the sprue assembly. The individual parts are removed by cold-break (dipping in liquid nitrogen and breaking the parts off with hammer and chisel) or with large cutoff saws. Now all that remains is finishing.
First the gate, or the place where the part was connected to the sprue, must be removed. The gate is ground off to part specifications. Parts are also inspected to make sure they were cast properly, and if not are either fixed or scrapped. Depending on the investment casting facility and specifications, more finishing work can be done on-site, sub-contracted, or not done at all.
Investment casting yields exceedingly fine quality products made of all types of metals. It has special applications in fabricating very high-temperature metals, especially those which cannot be cast in metal or plaster molds and those which are difficult to machine or work.
Nonexpendable mold casting
Nonexpendable mold casting differs from expendable processes in that the mold need not be reformed after each production cycle. This technique includes at least four different methods: permanent, die, centrifugal, and continuous casting.
Permanent Mold Casting
Permanent mold casting (typically for non-ferrous metals) requires a set-up time on the order of weeks to prepare a steel tool, after which production rates of 5-50 pieces/hr-mold are achieved with an upper mass limit of 9 kg per iron alloy item (cf., up to 135 kg for many nonferrous metal parts) and a lower limit of about 0.1 kg. Steel cavities are coated with refractory wash of acetylene soot before processing to allow easy removal of the workpiece and promote longer tool life. Permanent molds have a life which varies depending on maintenance of after which they require refinishing or replacement. Casted parts from a permanent mold generally show 20% increase in tensile strength and 30% increase in elongation as compared to the products of sand casting.
The only necessary input is the coating applied regularly. Typically, permanent mold casting is used in forming iron-, aluminium-, magnesium-, and copper-based alloys. The process is highly automated.

Die-Casting
In die-casting molten metal is injected into a mould at high pressures. Set-up time for dies is 1-2 hours, after which production rates of 20–200 pieces per hour-mould are normally obtained. Maximum mass limits for magnesium, zinc, and aluminium parts are roughly 4.5 kg, 18 kg, and 45 kg, respectively (though larger machines do exist); the lower limit in all cases is about 30 g. Die injection machines are generally large (up to 3 × 8 m) and operate at high pressures — 100 megapascals (1000 kgf/cm2) and higher, although aluminium usually is processed at lower pressure. A well-designed unit produces over 500,000 castings during the production lifetime of a single mould. While the dies used in the process are quite expensive, if a very large number of castings can be produced, significant cost savings can be achieved when a component is manufactured by die casting. The major production step is die construction, usually a steel alloy requiring a great deal of skill and fine tooling to prepare. Mostly non-ferrous materials are die-cast, such as aluminium, zinc, magnesium, and copper-based alloys.
This is the process used in the production of certain toys, notably that of model automobiles, see: die-cast toy,Matchbox
Centrifugal casting
Centrifugal casting is both gravity- and pressure-independent since it creates its own force feed using a temporary sand mold held in a spinning chamber at up to 90 g (900 m/s²). Lead time varies with the application. Semi- and true-centrifugal processing permit 30-50 pieces/hr-mold to be produced, with a practical limit for batch processing of approximately 9000 kg total mass with a typical per-item limit of 2.3-4.5 kg.
Industrially, the centrifugal casting of railway wheels was an early application of the method developed by German industrial company Krupp and this capability enabled the rapid growth of the enterprise.
Small art pieces such as jewelry are often cast by this method using the lost wax process, as the forces enable the rather viscous liquid metals to flow through very small passages and into fine details such as leaves and petals. This effect is similar to the benefits from vacuum casting, also applied to jewelry casting.
Continuous Casting
Continuous casting is a refinement of the casting process for the continuous, high-volume production of metal sections with a constant cross-section. Molten metal is poured into an open-ended, water-cooled copper mould, which allows a ‘skin’ of solid metal to form over the still-liquid centre. The strand, as it is now called, is withdrawn from the mould and passed into a chamber of rollers and water sprays; the rollers support the thin skin of the strand while the sprays remove heat from the strand, gradually solidifying the strand from the outside in. After solidification, predetermined lengths of the strand are cut off by either mechanical shears or travelling oxyacetylene torches and transferred to further forming processes, or to a stockpile. Cast sizes can range from strip (a few millimetres thick by about five metres wide) to billets (90 to 160 mm square) to slabs (1.25 m wide by 230 mm thick). Sometimes, the strand may undergo an initial hot rolling process before being cut.
Continuous casting provides better quality product as it allows finer control over the casting process, along with the obvious advantages inherent in a continuous forming process. Metals such as steel, copper and aluminium are continuously cast, with the largest tonnage poured being steel.