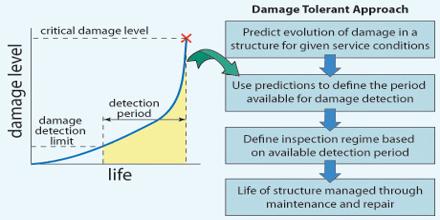 Damage Tolerance is based on the principle that while cracks due to fatigue and corrosion will develop in the aircraft structure, the process can be understood and controlled. It’s structures are designed to sustain cracks without catastrophic failure until the damage is detected in scheduled inspections and the damaged part is repaired or replaced. This is commonly used in aerospace engineering to manage the extension of cracks in structure through the application of the principles of fracture mechanics. In aerospace engineering, structure is considered to be damage tolerant if a maintenance program has been implemented that will result in the detection and repair of accidental damage, corrosion and fatigue cracking before such damage reduces the residual strength of the structure below an acceptable limit.