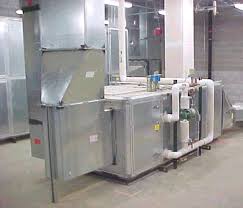 The ratio of useful energy output (at the point of use) to the energy input in consistent units for a designated time period, expressed in percent.

The ratio of net equipment cooling capacity in Btu/h to total rate of electric input in watts (W) under designated operating conditions. If the output capacity in Btu/h is converted to watts (to create consistent units) the result is equal to the cooling COP (EER X 3.41 = COP.)

The capacity for doing work taking a number of forms that may be transformed from one into another, such as thermal (heat), mechanical (work), electrical and chemical in customary units, measured in kilowatt-hours (kWh) or British thermal units (Btu).

Lowering of the dry-bulb temperature as air moves over a water surface.

The uncontrolled outward air leakage through cracks and interstices in any building element and around windows and doors of a building caused by the pressure effects of wind and/or the effect of differences in the indoor and outdoor air density.

The sum of the nominal power demand (nameplate horsepower) of motors of all fans that are required to operate at design conditions to supply air from the heating or cooling source to the conditioned space(s) and return it to the source or exhaust it to the outdoors.

Any form of cooling that does not require energy intensive mechanical vapor compression cooling, such as vapor compression refrigeration. Free cooling can come from natural or forced ventilation or evaporative cooling.

a reported phenomenon of the 1980s and afterward, according to which the average temperature on earth is gradually increasing over its level in recent history; attributed to the increased concentration in the atmosphere of gases such as carbon dioxide that trap heat radiating upward and reradiate it toward earth.

Conveying means, such as ducts, pipes, and wires, to bring substances or energy from a source to the point of use. The distribution system includes such auxiliary equipment as fans, pumps, and transformers.

The equipment, distribution network, and air terminals that provide either collectively or individually the processes of heating, ventilating, or air conditioning to a building.

HVAC system equipment provides, in one (single package) or more (split system) factory-assembled packages, means for air circulation, air cleaning, air cooling with controlled temperature, dehumidification, and, optionally humidification. Supplied either alone (unitary) or in combination with a heating and cooling plant. The cooling function may be either evaporatively, electrically or heat operated and the refrigerant condenser may be air, water or evaporatively cooled.