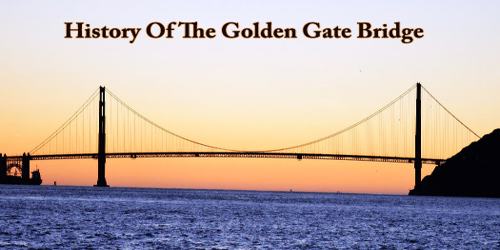 History Of The Golden Gate Bridge

The Golden Gate Bridge is an iconic structure, which is a suspension bridge spanning the Golden Gate, the one-mile-wide (1.6 km) strait connecting San Francisco Bay and the Pacific Ocean. The structure links the U.S. city of San Francisco, California the northern tip of the San Francisco Peninsula to Marin County, carrying both U.S. Route 101 and California State Route 1 across the strait. The bridge is one of the most internationally recognized symbols of San Francisco, California, and the United States. It was initially designed by engineer Joseph Strauss in 1917. It has been declared one of the Wonders of the Modern World by the American Society of Civil Engineers. 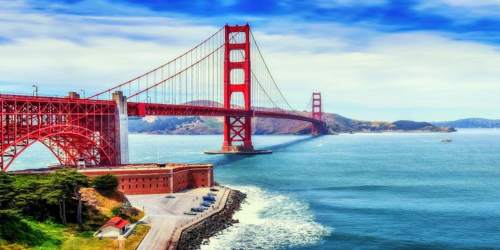 The dream of connecting San Francisco to its northern neighbors became a reality when construction commenced in 1933. Given the chance for steady employment amid the Great Depression, construction crews braved treacherous conditions as the roadway and towers took shape over open water. The Golden Gate Bridge, opened to the public in 1937, has endured as a picture-perfect landmark and an engineering marvel.

Today, this beloved international icon and true engineering marvel carries about 40 million vehicles a year and serves not only as a vital transportation link but also as a major travel destination for millions of visitors from around the world.

The Frommer’s travel guide describes the Golden Gate Bridge as “possibly the most beautiful, certainly the most photographed bridge in the world.” At the time of its opening in 1937, it was both the longest and the tallest suspension bridge in the world, with a main span of 4,200 feet (1,280 m) and a total height of 746 feet (227 m).

Following decades of public calls to connect the burgeoning metropolis of San Francisco to its neighbors across the mile-wide Golden Gate, city engineer Michael O’Shaughnessy in 1919 was charged with finding someone capable of constructing a bridge at a reasonable cost.

The job went to a Chicago-based engineer named Joseph Strauss, a drawbridge builder who believed he could complete the grand-scale project for a modest $25 to $30 million. After submitting his sketches for a cantilever-suspension hybrid span in June 1921, Strauss set about convincing the communities on the northern end of the strait that the bridge would be to their benefit.

In May 1924, Colonel Herbert Deakyne held the second hearing on the Bridge on behalf of the Secretary of War in a request to use federal land for construction. Deakyne, on behalf of the Secretary of War, approved the transfer of land needed for the bridge structure and leading roads to the “Bridging the Golden Gate Association” and both San Francisco County and Marin County, pending further bridge plans by Strauss. Another ally was the fledgling automobile industry, which supported the development of roads and bridges to increase demand for automobiles. By August 1925, the people of Marin, Sonoma, Del Norte and parts of Napa and Mendocino counties had agreed to join the district and offer their homes and businesses as collateral for securing funds. 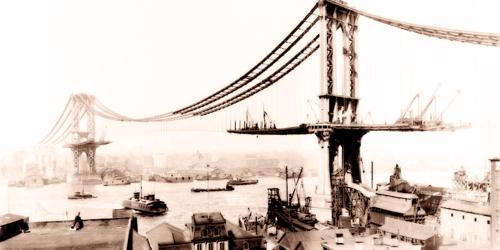 Its construction, under the supervision of chief engineer Joseph B. Strauss, began in January 1933 and involved many challenges. The strait has rapidly running tides, frequent storms, and fogs that made construction difficult. During one such fog on August 14, 1933, a cargo vessel collided with the access trestle, causing serious damage. Workers also had to contend with the problem of blasting rock under deep water to plant earthquake-proof foundations. A movable safety net, innovated by Strauss, saved a total of 19 men from falling to their deaths during construction. However, the safety net failed on February 17, 1937, when it gave way under the weight of a scaffolding collapse; of the 13 men who were on the scaffolding, one jumped clear, two survived the fall into the water, and 10 were killed. One other worker fell to his death during the construction, for a total of 11 worker deaths over four years.

The roadway was completed on April 19, 1937, and the bridge officially opened to pedestrians on May 27 of that year. As part of the festivities, Strauss dedicated a poem titled “A Mighty Task Is Done.” The following day, President Franklin D. Roosevelt announced that the bridge was open to cars and the rest of the world via White House telegraph.

The main span, 1,280 meters (4,200 feet) long, is suspended from two cables hung from towers 227 meters (746 feet) high; at midpoint the roadway is 81 meters (265 feet) above mean high water. Until the completion of the Verrazano-Narrows Bridge in New York City in 1964, it had the longest main span in the world. 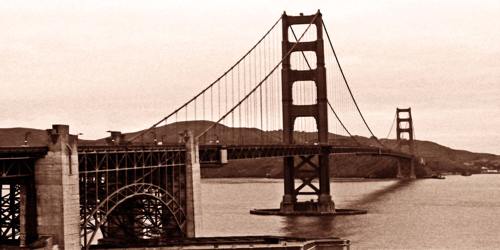 The Golden Gate Bridge withstood the destructive Loma Prieta earthquake of 1989, and was closed to traffic only three times in its first 75 years due to weather conditions. Believed to be the most photographed bridge in the world, this landmark was named one of the seven civil engineering wonders of the United States by the American Society of Civil Engineers in 1994.