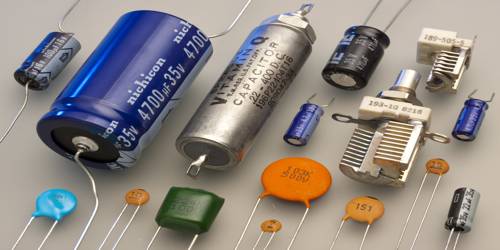 Electronic capacitors are one of the most widely used forms of electronics components. A capacitor is a device that stores energy in an electric field, by accumulating an internal imbalance of electric charge. It is made of two conductors separated by a dielectric (insulator).

Electrolytic capacitors are often used in circuits where current levels are relatively high. Also under some circumstances and current sourced from them needs to have a low source impedance, for example when the capacitor is being used in a power supply circuit as a reservoir capacitor. Under these conditions, it is necessary to consult the manufacturer’s datasheets to discover whether the electrolytic capacitor chosen will meet the requirements of the circuit. If the ESR is high, then it will not be able to deliver the required amount of current in the circuit, without a voltage drop resulting from the ESR which will be seen as a source resistance.

One of the problems with electrolytic capacitors is that they have a limited frequency response. It is found that their ESR rises with frequency and this generally limits their use to frequencies below about 100 kHz. This is particularly true for large capacitors, and even the smaller electrolytic capacitors should not be relied upon at high frequencies. To gain exact details it is necessary to consult the manufacturer’s data for a given part.

Although electrolytic capacitors have much higher levels of capacitance for a given volume than most other capacitor technologies, they can also have a higher level of leakage. This is not a problem for most applications, such as when they are used in power supplies. However, under some circumstances, they are not suitable. For example, they should not be used around the input circuitry of an operational amplifier. Here even a small amount of leakage can cause problems because of the high input impedance levels of the op-amp. It is also worth noting that the levels of leakage are considerably higher in the reverse direction.

Electrolytic capacitors have a very wide tolerance. Often capacitors may be quoted as -20% and +80%. This is not normally a problem in applications such as decoupling or power supply smoothing, etc. However, they should not be used in circuits where the exact value is of importance.