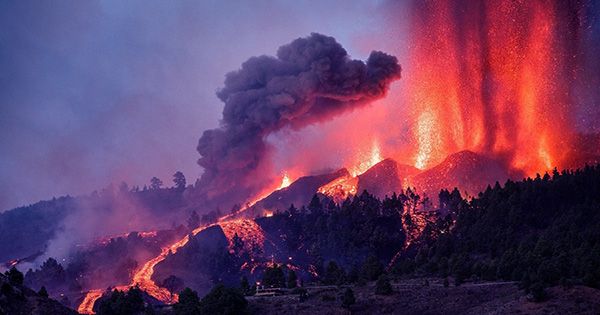 A violently erupting volcano on La Palma, Canary Islands, has forced thousands of residents to flee their homes and destroyed scores of structures.

According to Spanish newspaper El Pas, the Cumbre Vieja (“Old Summit”) volcano began spewing lava soon after 3 p.m. on September 19 in the sparsely populated Cabeza de Vaca area. The situation quickly deteriorated when the volcano’s eruption began to threaten various municipalities with a population of roughly 35,000 people. The Civil Guard evacuated 5,000 people from their houses by 5 p.m., raising the emergency level to red.

It’s the first time Cumbre Vieja has erupted since 1971, and it’s been a magnificent explosion, hurling molten rock hundreds of meters into the air, creating massive plumes of smoke, and shaping gigantic rivers of lava.

According to BBC News, “the most astonishing thing that I’ve never encountered is that the roar coming from the volcano, it sounds like twenty fighter planes taking off and it’s really loud, it’s incredible,” said Jonas Perez, a local tour guide.

So yet, no injuries or deaths have been reported, but El Pais reports that the lava may have destroyed up to 100 homes in El Paso. Sergio Rodriguez, the mayor, reported that at least 20 homes in one town had been buried. Despite the clearly dangerous situation, officials have advised citizens to stay away from the volcano to observe the eruption.

According to the Associated Press, Mariano Hernández, the head of La Palma’s council, “people should not venture near the eruption location where the lava is flowing.” “The evacuation is causing severe problems since the roads are clogged with people attempting to get close enough to watch it.”

The situation has become so critical that Spanish Prime Minister Pedro Sánchez has canceled his trip to the United States in order to visit La Palma and monitor operations.

Following an extraordinary spell of seismic activity in the area, residents have been on high alert regarding their resident volcano. According to Reuters, some 4,000 earthquakes were detected in the Cumbre Vieja national park in the south of La Palma last Thursday, prompting authorities to upgrade the emergency status to yellow.

El Pais writes that the volcanic activity might endure “a few weeks or months,” according to Nemesio Pérez, director of the Canaries’ Volcanology Institute. The duration of the eruption, however, will be determined by the amount of magma accumulated in the volcano’s “reservoir,” according to him. They’ll be actively monitoring the eruption’s sulfur dioxide emissions to keep track of it. They can confidently proclaim the eruption over if two days have passed without any emissions. However, it remains to be seen how this volcanic spectacle would unfold.