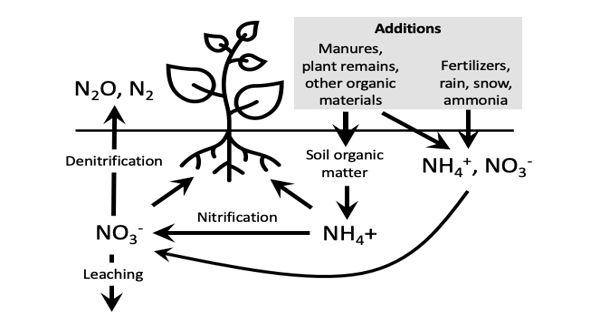 Modern agriculture faces two major challenges: producing enough food to feed the world’s growing population while minimizing environmental damage associated with intensive agriculture. According to a new paper published in the Proceedings of the National Academy of Sciences, one key way to address both challenges is to keep more nitrogen in soil as ammonium (PNAS).

The use of nitrogen fertilizers today contributes significantly to greenhouse gas emissions, air pollution, and water pollution, but they are also required for crop growth. Reducing this pollution is critical, but with increased food production, nitrogen use is likely to increase. At the same time, the world’s human population is growing, and agriculture must produce enough food to feed everyone while avoiding the need to clear more forests for agriculture.

Farmers used to be able to increase food production by applying more nitrogen fertilizer to their farmlands, but this is no longer a viable or acceptable solution. Instead, the researchers suggest that farmers consider switching to a nitrate-ammonium blend, which can reduce pollution while increasing food production. Ammonium, a type of nitrogen, binds to soil and thus has a lower likelihood of leaching into waterways.

Farmers should consider shifting to a blend of nitrate and ammonium. Keeping more nitrogen in soil as ammonium may be one key way to address both challenges, according to a new paper in the Proceedings of the National Academy of Sciences (PNAS).

“Present fertilizer systems are polluting, inefficient, and harmful to ecosystem health,” said Guntur Subbarao, a senior researcher at the Japan International Research Center for Agricultural Sciences and one of the paper’s co-authors (JIRCAS). “If farming can shift from relying solely on nitrate in soils to a system that incorporates nitrate and ammonium, it could have far-reaching implications in terms of limiting nitrogen pollution while increasing crop yields.”

“New tools for retaining more existing soil nitrogen in the form of ammonium could also enable crop variety selection that achieves higher yields through a blend of nitrogen forms,” said co-author Tim Searchinger, a senior research scholar at Princeton University’s School of Public and International Affairs’ Center for Policy Research on Energy and the Environment. “There is the possibility of a double benefit that reduces nitrogen pollution, including greenhouse gas emissions, while also assisting the world in saving forests by producing significantly more food on the same land.”

The majority of nitrogen pollution mitigation strategies rely on limiting pollution at the “front end”—by attempting to apply fertilizer more carefully. However, the authors explain that no matter how meticulously fertilizer is applied, there is always nitrogen leakage at the “back end.” This leakage occurs because cropland soil nitrogen quickly converts to nitrate, a form of nitrogen that easily leaches into groundwater and waterways and whose breakdown releases nitrous oxide, a potent greenhouse gas.

According to the authors, this is where ammonium comes in. It does not degrade into nitrous oxide unless first converted to nitrate. While high levels of ammonium are toxic to most plants, a little-known line of research has shown that a mixture of nitrate and ammonium tends to increase crop yields significantly, even by 50 percent or more, when compared to today’s common soil conditions, which are nearly all nitrate.

Until recently, this academic finding was irrelevant because microorganisms in crop fields rapidly convert nitrogen to nitrate through a process known as nitrification. The authors, on the other hand, identify two emerging methods for maintaining a greater balance of nitrogen forms in soils. One approach is to use synthetic nitrification inhibitors with coatings to limit nitrification over long periods of time. The other option is to take advantage of some plants’ natural ability to prevent nitrification.

A plant trait that prevents microbes from converting ammonium to nitrate was discovered in a widely planted tropical grass, but researchers have recently begun breeding varieties of all major grains, such as wheat, to have this property.

Farmers, scientists, and policymakers could effectively increase food production while minimizing environmental degradation by cultivating plants that benefit from ammonium and aid ammonium retention in the soil by inhibiting nitrification. Because there is currently no large-scale funding support for these efforts, the authors recommend additional research efforts. They also advocate for policies that shift fertilizer subsidies toward nitrification-inhibiting fertilizer forms or crop varieties.

“One key benefit of this research is that once these varieties are developed, all farmers around the world should be able to use them at no additional cost and with higher yields,” Subbarao said.