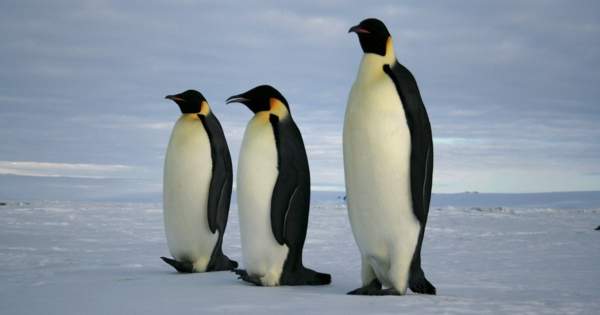 A new study published today in Global Change Biology adds to the body of knowledge about how species extinction risk is increasing as a result of rapid climate change and an increase in extreme climate events such as glacial calving and sea ice loss. The study, led by Stephanie Jenouvrier, associate scientist and seabird ecologist at Woods Hole Oceanographic Institution, and co-authored by an international team of scientists, policy experts, ecologists, and climate scientists, provided critical research and projections tailored for use by the United States Fish and Wildlife Service. Their work proposed that emperor penguins be listed as threatened under the Endangered Species Act and this week, USFWS submitted that listing proposal.

“Scientists have a responsibility to raise public awareness of the need for change through objective evidence,” Jenouvrier said. “We put together this paper for the USFWS with the help of a dedicated team to provide additional analyses of future projections and help inform policy and protection for the species.”

The study presents the projected dynamics of all known emperor penguin colonies under various greenhouse gas emission scenarios, using a climate-dependent meta-population model that includes, for the first time, the effects of extreme climate events based on colony observational satellite data.

“Protection of species through legal frameworks should facilitate conservation actions, which in turn should help mitigate climate change impacts,” says co-author Shaye Wolf, Climate Science Director at the Center for Biological Diversity. “The study is framed in the context of the US Endangered Species Act, one of the most progressive pieces of legislation in relation to species protection,” said co-author Judy Che-Castaldo of the Lincoln Park Zoo.

A new study provides valuable new data that highlights how species extinction risk is accelerating due to rapid climate change and an increase in extreme climate events, such as glacial calving and sea ice loss.

The research shows that extreme events have an effect on the resiliency, redundancy, and representation (3Rs) of emperor penguins. The ability to withstand stochastic (or random) disturbance is referred to as resilience, and it can be measured through population size, growth rate, and connectivity among populations. The ability to withstand catastrophic events is referred to as redundancy, and it takes into account the number, distribution, resiliency, and connectivity of populations.

The ability to adapt to changing environmental conditions is related to capturing the geographic, genetic, and life history variation that exists across the species’ ecological setting. The 3Rs encompasses aspects that contribute to species persistence (e.g., demography, spatial distribution, and diversity) and are critical for assessing climate threats in the near future. According to the study, if sea ice continues to decline at the rate predicted by climate models under current energy-system trends and policies, the 3Rs will be drastically reduced, and almost all colonies will be extinct by 2100.

The paper’s novel findings have important implications for assessing the risks of climate change to other species. According to the authors, rapid climate change is putting strain on species and ecosystems, and the risk of extinction will increase as global warming continues. Emperor penguins live in Antarctica’s icy coastal regions, but current climate models predict significant declines in Antarctic Sea ice, which is essential to the emperor penguins’ life cycle. The study emphasizes the importance of legal recognition and enhanced precautionary management, especially in light of continued increases in greenhouse gas emissions.

“Given the species’ reliance on sea ice for breeding, molting, and feeding, the most serious threat to emperor penguins is climate change, which would result in Antarctic Sea ice loss over the next century,” said Marika Holland, a climate scientist with the National Center for Atmospheric Research. “Trends in warming and consequential sea ice losses through the end of the century are clear and unidirectional under all projections from all climate models.”

Christophe Barbraud of the Centre d’Etudes Biologiques de Chizé has studied emperor penguins for decades and added, “Long-term monitoring of emperor penguins at Pointe Géologie, Antarctica, for the past 70 years has been critical in understanding how sea ice affects the bird’s life cycle. This knowledge, combined with recent satellite imagery, provided the information required to construct and validate population models.”

“The high-resolution satellite images allowed us to gain remote access to places we would never have been able to see otherwise. As it turns out, colonies “blink” from time to time, ostensibly due to drastic changes in the environment that we are still working to resolve “Michelle LaRue of the University of Minnesota’s Department of Earth and Environmental Sciences agreed.

Extreme occurrences, as documented through satellite data, increase earlier studies’ expected decreases. If greenhouse gas emissions continue to rise at current levels, causing temperatures to rise and Antarctic sea ice to shrink, penguin population numbers will decline gradually until around 2040, after which they will decline at a much faster rate as sea ice coverage falls below a usable threshold, with the species becoming quasi-extinct as 98 percent colonies have vanished by 2100.

Phil Trathan, the British Antarctic Survey’s (BAS) head of conservation biology, has been studying Antarctic penguins for over 30 years. “Near-term global policy decisions made in accordance with the Paris Agreement’s objectives are intended to keep temperature increases well below 2°C. This would provide emperor penguins with safe havens, halting dramatic global population declines. As a result, the future of emperor penguins is ultimately determined by decisions made today. To limit further warming, the most important action is to reduce greenhouse gas emissions.”

“We hope that global society will listen to science and act in accordance with the times. To protect these systems, legal frameworks must be well-founded and based on the best available scientific evidence. Building an international framework will be critical, but in the meantime, immediate efforts should focus on existing tools, such as the ESA.”

The international team that conducted the study emphasizes how this work crosses scientific disciplines and how interdisciplinary science is critical in protecting the future of this iconic species.

“This study provides the best available science for projecting emperor penguin populations in the context of future climate change and informs policymakers about whether the emperor penguin deserves to be listed under the ESA,” Jenouvrier concluded. “The future of this iconic species is dependent on immediate decarbonization actions and increased protections for species threatened by climate change.”