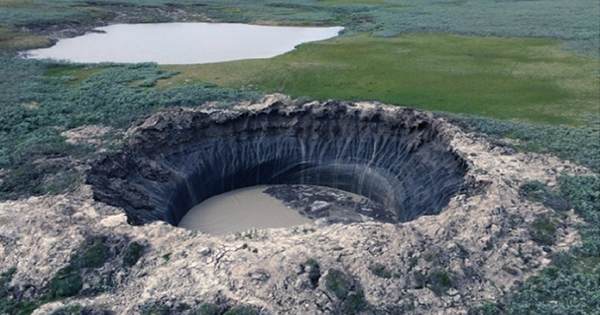 In recent years, the depths of Siberia have been scarred by an increasing number of massive craters formed by explosive gases bursting beneath the surface and violently breaking through the permafrost above. We may now be able to figure out what caused them. A new study has found that the culprit is most likely warming temperatures in the Russian Arctic caused by the climate crisis, as many had predicted. The gaping craters in northwestern Siberia first gained international attention in 2014, when a 40-meter (131-foot) wide hole appeared in Yamal following a strong explosion. At least 20 additional craters have been discovered and researched since then.

C17, a 20-meter-wide (65-foot) hole that developed in the center area of Yamal in August 2020, was one of the most recent (pictured above). The craters were once thought to have been caused by apocalyptic asteroids or aliens, but it soon became clear that the holes were emerging in permafrost-covered areas atop natural gas resources. The abrupt appearance of the craters, on the other hand, was stunning. Some speculated about climate change, while others blamed the region’s extensive fossil fuel extraction.

Scientists from Moscow’s Skolkovo Institute of Science and Technology have proven that the craters are most likely a result of climate change in a recent study published in GeoSciences. Warming temperatures, which are particularly prominent in the Earth’s Arctic region, help to degrade permafrost and ground ice, making these craters all the more likely, according to the scientists, who studied the permafrost and local geology near the newcomer crater C17. Methane builds up in the spaces in and around the permafrost below ground, gradually increasing in pressure like a shaken soda bottle.

Warmer temperatures cause the cavity’s permafrost “roof” to thaw and disintegrate, increasing the risk of collapse. Furthermore, as the permafrost thaws, it will release trapped methane, adding to the pressure build-up. Warmer temperatures cause intra-permafrost gas-water fluids to move more quickly in decaying permafrost, weakening the ceilings above the gas pools even more. When the ceiling grows weak enough, it will give in to the increasing pressure of the gas underneath and — BOOM! — a massive explosion will occur, creating a crater and a shower of debris.

The research effectively backs up what many researchers had suspected. However, the new research contains some encouraging news for the remainder of Eurasia and North America. The explosive craters, according to their research, are caused by the particular cryological and geological make-up of northern West Siberia, implying that they are less likely to occur elsewhere in the Arctic.