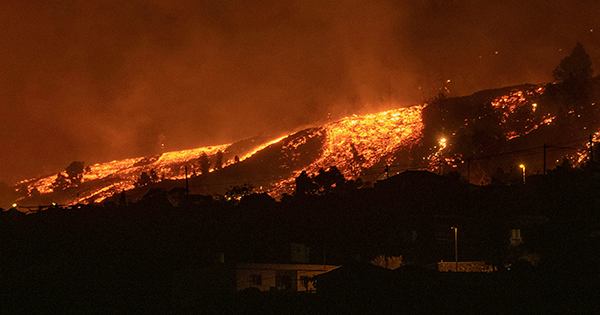 During the La Palma eruption, watch as flowing lava wipes out the church tower

A video of lava destroying a church in La Palma, one of the Canary Islands, has surfaced amid the mayhem of an erupting volcano. While crowds and firefighters watch, white ash precedes the rushing lava that pushes into Todoque, and the church tower crumbles into black dust as it swept away. However, the church represents only a small part of the damage as the Cumbre Vieja volcano continues to erupt, destroying 500 structures and displacing nearly 6,000 people so far.

The lava flowed down the volcano’s steep slopes towards the sea, destroying many houses in Todoque and the surrounding surroundings. The lava was around 800 meters (2600 feet) from the sea as of Monday, posing new dangers if it contacts with the water. Officials must now consider the possibility of plumes of water vapor mixed with deadly volcanic gases soaring into the sky if contact made, posing a risk of respiratory problems and burns to residents.

Despite the fact that the volcano’s pressure is diminishing, scientists estimate the eruption to last at least another three months. Some people have been able to return home, while the bulks are still in shelters awaiting news.

TODOQUE (Spanish), lava from an erupting volcano penetrated the village of Todoque and reached the church on the Spanish island of La Palma, causing it to collapse. The dramatic scene captured on camera by TV Canarias, which showed a cloud of dense smoke engulfing the church’s bell tower before it collapsed and vanished from view.

The volcano, which has buried more than 500 buildings and displaced over 6,000 people since last week, slowed its activity on Monday, though scientists cautioned that it was too early to declare the eruption phase over, and authorities ordered residents to stay indoors to avoid the harmful fumes caused by lava colliding with seawater.

The ash cloud rising from the main event, which first emerged on Sept. 19. Live footage from the Cumbre Vieja range on the island of La Palma, carried by the public Canary Islands Television, showed that it came to a halt in the early hours of Monday. After a two-hour hiatus, the plume of ash and volcanic material reappeared. In a tweet, the Madrid-based Institute of Geosciences, IGEO, stated, “The volcano of La Palma has entered a phase of decreased activity.” “Let’s see how it develops over the next few hours.”

The volcanology institute of the archipelago issued graphs demonstrating a substantial decrease in seismic activity in the area. “The volcanic tremor has nearly vanished in the previous hours, as has the strombolian explosive activity,” Involcan wrote on Twitter. However, the institute had to respond with another post later, stating that “the re-emission of lava in the main cone is also confirmed,” in addition to the ash cloud.

The swarm of quakes that preceded and accompanied Spain’s first volcanic eruption on land in half a century proceeded south, with more activity reported in the island’s Fuencaliente district, according to Spain’s National Geographic Institute.”Just because the volcano is less active currently doesn’t mean it can’t change,” Stavros Meletlidis, the institute’s chief investigator, told Antena 3, a private Spanish station.

According to scientists, the heat shock causes the discharge of water vapor plumes containing hydrochloric acid and small particles of volcanic glass, which can irritate the skin, eyes, and respiratory tract. After winds dissipated, the volcano’s cloud the day before, shopkeepers and residents swept the coating of ash that had fallen over the island’s capital, Santa Cruz de Las Palmas. Because lava that is more fluid was descending a steep slope near cliffs on the sea, the flow’s pace has increased since Sunday. Authorities reported the flow was about 800 meters away from reaching the water on Monday morning.

According to Copernicus, the EU’s satellite monitoring program, the lava has buried over 230 hectares and destroyed over 18 kilometers of roads. Houses, schools, churches, and health centers been damaged by the molten lava, as well as irrigation equipment for the island’s banana plantations, which support roughly one-third of the island’s jobs. Since the volcano erupted, no fatalities or significant injuries been reported. La Palma is one of the volcanic Canary Islands, an archipelago off the coast of northwest Africa, with a population of roughly 85,000 people. At its widest point, the island is 35 kilometers (22 miles) long and 20 kilometers (12 miles) wide.