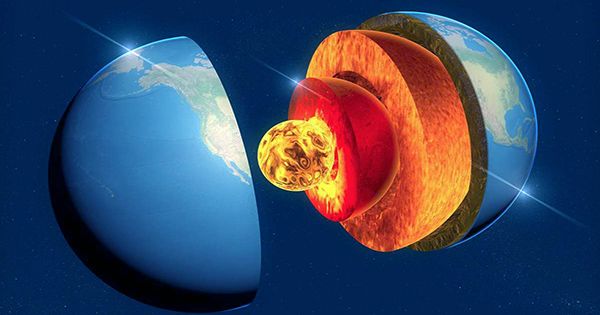 The innermost part of our planet may be on one side of the core. This advice is based on a model created by seismologists at UC Berkeley. This method explains why seismic waves travel differently through the inner core. The hypothesis is given in detail in Nature Geoscience. We don’t understand much about what goes on a few thousand kilometers under our feet. We know that the Earth has an inner core, which has been crystallizing for at least 500 million years, but could be much longer. This crystallization releases heat, leaving the outer core beautiful and molten.

The motion of the outer core creates a magnetic field that protects us from cosmic radiation which is good for us. The crystallization of the inner core does not seem to be the same though. By studying the motion of some seismic wave waves that can travel through the inner center, scientists have noticed that some aspects are better, forcing the waves to pass through them faster.

To illustrate this, the new model suggests that the core grows faster than about 60 percent from one side (below Indonesia) to the other (below Brazil). The end result is iron crystals that are oriented towards rotation along the axis of the planet. Lead author Dr Daniel Frost said in a statement, “The simplest model seemed a bit unusual – that internal core was incomplete.”

“Some say the west side looks different from the east side to all sides of the center, not just at the top of the internal roots, someone has an opinion. We can only explain that one side is growing faster than the other.” The model narrows the potential age limit of the internal origin, leading to more mystery. What was the magnetic field producing before the inner core was crystallized by heating the outer core? The team suggests that the separation of light elements from iron did the trick. Explained Professor Barbara Romanowicz, emeritus director of the Berkeley Seismological Laboratory, “Between half a billion and one and a half billion years – we provide loose bound boundaries instead of the age of the inner core – which could be helpful in debating how the magnetic field was formed before the existence of the inner core.”

“We know that the magnetic field already existed 3 billion years ago, so other processes must have been driven to the outer center at that time.” This model has limitations based on certain assumptions and data on the interior of our planet. Studying what is going on in the world is easier than finishing, so more seismic data will be needed to validate this model.