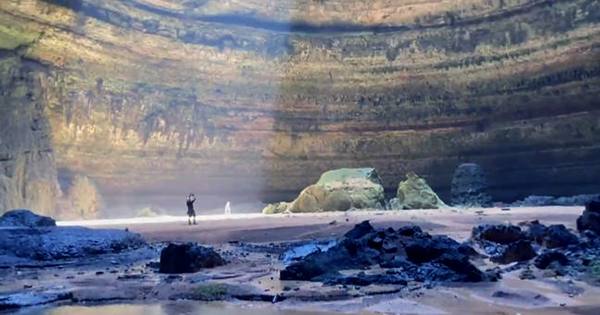 Explorers have finally descended into Yemen’s Fabled “Well Of Hell”

The Well of Barhout, sometimes known as the “Well of Hell,” is a natural sinkhole in Yemen that has been the subject of fantastic narratives. The concept that it is a prison for djinns, the genies of Middle Eastern legend, has earned it a strong nickname. Humans have now investigated this well for the first time, and while they did not find any genies trapped inside, they did discover cave pearls, different dead animals, and (sorry, Dr Jones) snakes.

The Oman Cave Exploration Team (OCET), a group of eight skilled cavers, accomplished the feat by descending 112 meters (367 feet) from the well’s aperture, which extends 30 meters (100 feet) across, to its depths.

According to Yemeni authorities, the sinkhole created “millions and millions” of years ago, and no one has ever reached the bottom before this team. Previous explorations had only gone about half way down and reported foul odors coming from the bottom (it’s unclear whether this was the reason they didn’t go any deeper). The latest investigation revealed no particularly unpleasant odors, though they did report that the deceased birds were somewhat stinky. So, why would someone wish to go to the bottom of the “Well of Hell”?

“We felt this was something that would unveil a new wonder and part of Yemeni history,” Mohammed al-Kindi, a geology professor at the German University of Technology in Oman and a member of the expedition team, told AFP. “We took samples of water, rocks, soil, and a few dead animals, but they haven’t been tested yet.”

The snakes were not very aggressive, according to the experts, and they did not look threatened by the surprise human visitation. The footage does not include any of the crawling critters, but it does include some stunning cave structures.

Water trickling to the cave’s bottom can produce a variety of intriguing structures, including cave pearls. Lime green cave pearls were purportedly discovered here. They are calcium salt concentrations around a nucleus, similar to how an oyster pearl forms, and are made primarily of calcite. They are also structured in concentric layers, just as normal pearls. This is due to the fact that a sphere allows for the most deposition on the smallest surface. Moving water gives them a lustrous sheen that keeps them lovely and smooth. They tend to disintegrate once they’ve dried.

Soon, a comprehensive report on the discoveries from the materials recovered from the well’s bottom will be available. Meanwhile, let’s hope no enraged djinns, enraged at being roused from their slumber, decide retaliation is necessary for disturbing their serenity.